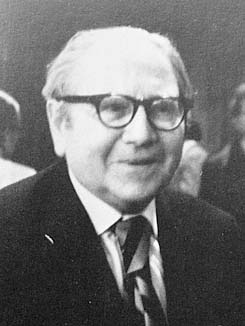 The Bergman Prize honors the memory of Stefan Bergman, best known for his research in several complex variables, as well as the Bergman projection and the Bergman kernel function that bear his name. Awards are made every year or two in: 1) the theory of the kernel function and its applications in real and complex analysis; or 2) function-theoretic methods in the theory of partial differential equations of elliptic type with attention to Bergman's operator method.

A native of Poland, Bergman (pictured) taught at Stanford University for many years and died in 1977 at the age of 82. He was an AMS member for 35 years. When his wife died, the terms of her will stipulated that funds should go toward a special prize in her husband's honor. The AMS was asked by the Wells Fargo Bank of California, the managers of the Bergman Trust, to assemble a committee to select recipients of the prize. In addition the Society assisted Wells Fargo in interpreting the terms of the will to assure sufficient breadth in the mathematical areas in which the prize may be given.

The amount of the prize varies. The income distributed to the beneficiary may be used only for the purpose of financially aiding that person, including the cost of living, in pursuing the above described program of mathematics study and the award shall be made upon those restrictions.

Franc Forstneric is awarded the Bergman Prize for his many contributions to several complex variables (SCV), as well as complex geometry and geometric analysis. He is being recognized for his foundational work on mapping problems for domains in complex spaces and more general complex manifolds, approximation theory in SCV, the development of the Oka principle, and complex analysis methods in the theory of minimal surfaces.

Mei-Chi Shaw is awarded the Bergman Prize for her many contributions to several complex variables, partial differential equations, and Cauchy-Riemann geometry. She is being especially recognized for her seminal work on the analysis of the $\bar\partial$ and $\bar\partial_{b}$ problems in settings where the ambient domain or ambient manifold is nonsmooth, which provides deep insight on the bearing of boundary regularity in the qualitative and quantitative analysis of the problems.

Submit a letter of nomination describing the candidate's accomplishments, complete bibliographic citations for the work being nominated, and a brief citation that explains why the work is important.