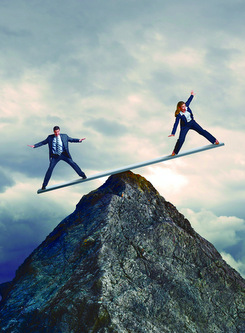 Tipping points are important--and well-named--features of many complex systems, including financial and ecological systems. At a tipping point, a small change in conditions in the system can result in drastic changes overall (just as a small change in the weight of one end of a see-saw can reverse positions). Most such systems are studied using mathematical models based on collections of differential equations. The variables in the equations are related, leading to feedback in the system and potentially substantial changes, such as economic collapse. Research is now being done to recognize tipping points in hopes that something can be done before it is too late.

Some catastrophic changes have occurred when Earth’s natural systems have been disrupted. One happened over 200 million years ago when more than 90% of the planet’s species became extinct. Mathematics helped in the formulation of a new theory for the cause of the die-off: a methane-producing microbe that thrived on nickel produced by active volcanoes in Siberia. Faster-than-exponential growth in carbon levels at the time pointed to a biological trigger, and computational genomics showed that that strain of microbe came into existence at about the same time as the extinctions. This is a case in which a tipping point was in fact about the size of a point.