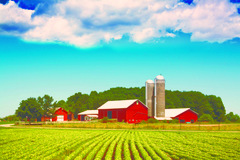 Farming, not an easy job in the first place, now requires more analytics and technology to meet the increasing demand for food. In one case, in California, mathematicians, hydrologists, and farmers met to design a plan that would minimize water used for crops but still make a profit for the farmers and meet consumer demand. The mathematical model that was created incorporated data such as plant growth properties and water requirements of different crops to identify which ones to plant, the best time to plant them, and which areas to leave unplanted. The farmers were happy to use their own resources and those of the community wisely, while the mathematicians were happy to work with experts in the field.

The application of math and high-tech approaches to farming is called precision agriculture. It involves collecting much more data than before, such as the weight of each hen in a chicken coop, and using models to find the best course of action to remedy any deficiencies in the production process. One aspect of farming that has become more efficient as a result is the use of fertilizer. Using GPS-equipped machines that sample the soil, farmers know exactly where more fertilizer is needed, thus overcoming the natural tendency to over-fertilize. As a result, more food is grown and less fertilizer is wasted, which means fewer nitrates in watershed run-off.

For More Information: "A Role for Modeling, Simulation, and Optimization in an Agricultural Water Crisis," Eleanor Jenkins and Kathleen Fowler, SIAM News, December 2014.