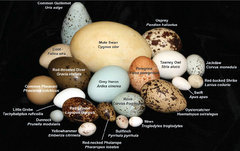 Despite extensive study, no one has been able to determine why some bird eggs are shaped more like a sphere than other eggs or why some are more symmetrical than others. Recently, though, researchers used geometry, vectors, polar coordinates, and partial differential equations to analyze eggs from 1,400 bird species. After gathering data, they plotted each species’ eggs on a graph with one axis representing the degree of elongation--how elliptical an egg is--and the other representing the amount of asymmetry--how pointy it is at one end--and found that the most streamlined birds have the most streamlined eggs. That is, overall, the best fliers, and occasionally swimmers, tend to lay the least spherical and least symmetrical eggs.

An egg’s main functions are nourishment and protection. A large spherical egg could give plenty of nourishment but might be too wide to be laid. A stretched thinner egg provides the same volume for nutrients but can exit through the mother’s pelvis more easily. The research team was able to identify two properties of the egg membrane, related to thickness and pressure, that explain the variation in egg shapes, but other questions remain. Does the strong correlation between flight and egg shape hold among all bird species? Is there a causal relationship? And perhaps the most fundamental question of all: Which came first, the chicken or the ellipse?