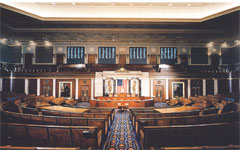 As difficult as it is to do the census, the ensuing process of determining the number of congressional seats for each state can be even harder. The basic premise, that the proportion of each state’s delegation in the House should match its proportion of the U.S. population, is simple enough. The difficulty arises when deciding what to do with the fractions that inevitably arise (e.g., New York can’t have 28.7 seats). Over the past 200 years, several methods of apportioning seats have been used. Many sound good but can lead to paradoxes, such as an increase in the total number of House seats actually resulting in a reduction of a state’s delegation. The method used since the 1940s, whose leading proponent was a mathematician, is one that avoids such paradoxes.

A natural question is Why 435 seats? Nothing in the Constitution mandates this number, although there is a prohibition against having more than one seat per 30,000 people. One model, based on the need for legislators to communicate with their constituents and with each other, uses algebra and calculus to show that the ideal assembly size is the cube root of the population it represents. Remarkably, the size of the House mirrored this rule until the early 1900s. To obey the rule now would require an increase to 670, which would presumably both better represent the population and increase the chances that the audience in the seats for those late speeches would outnumber the speaker.