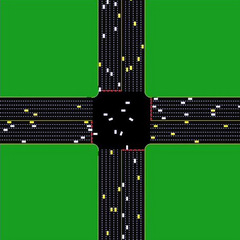 It may be hard to accept but it’s likely that we’d all be much safer in autonomous vehicles driven by computers, not humans. Annually more than 30,000 Americans die in car crashes, almost all due to human error. Autonomous vehicles will communicate position and speed to each other and avoid potential collisions--without the possibility of dozing off or road rage. There are still many legal (and insurance) issues to resolve, but researchers who are revving up the development of autonomous vehicles are relying on geometry for recognizing and tracking objects, probability to assess risk, and logic to prove that systems will perform as required.

The advent of autonomous vehicles will bring in new systems to manage traffic as well, for example, at automated intersections. Cars will communicate to intersection-managing computers and secure reservations to pass through. In a matter of milliseconds, the computers will use trigonometry and differential equations to simulate vehicles’ paths through the intersection and grant entry as long as there is no conflict with other vehicles’ paths. Waiting won’t be completely eliminated but will be substantially reduced, as will the fuel--and patience--currently wasted. Although the intersection above might look wild, experiments indicate that because vehicles would follow precise paths, such intersections will be much safer and more efficient than the ones we drive through now.