Mathematics Events at the 2010 AAAS Meeting

About 6500 people attended the annual meeting of the American Association for the Advancement of Science (AAAS) at the San Diego Convention Center February 18-22. Below are descriptions of some of the events related to mathematics that took place at the meeting. 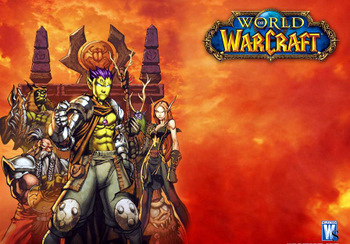 The first speaker, James Paul Gee (Arizona State University), is not a mathematician but he has done a good deal of research into learning through video games. Gee said that our current educational system doesn't create good problem solvers but using video games in school might, because the games are built on problem solving. He showed an example of a user's comment on a video game discussion board, which exhibited mathematical and scientific thinking. Unfortunately it is not known if the thinking and problem solving used in video games translates to other areas.

Zoran Popović (University of Washington) began his talk by noting the success of the online protein folding game. He is creating games and then using teacher and student feedback to modify the games and learn about the pathways that students take to learn concepts such as fractions. Image courtesy of Keith Devlin. 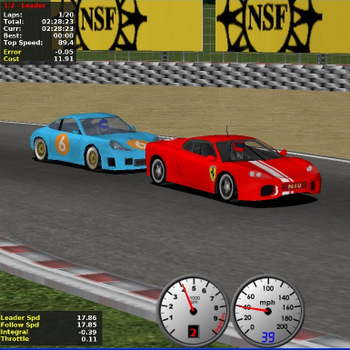 Keith Devlin (Stanford University), the organizer of the symposium, learned math the traditional way but feels that since mathematics is "about doing, not knowing," then video games may be a better alternative for students than books. He gave an example in which students could do complicated math in a setting they were familiar with (in this case a street market) but could not perform the same tasks at home, away from the setting. Instead of having to take students to different settings, video games could be tailored to individual students so that they could learn math in a situation that they are familiar with. Devlin pointed out that the cost of creating the kind of video games that will appeal to students is high, but he thinks the project is feasible.

The National Science Foundation (NSF) and the University of Southern California School of Cinematic Arts are partnering in a project called the Creative Science Studio to tell the story of scientific discovery in a visually appealing way. Elizabeth Daley, dean of the School of Cinematic Arts, pledged that the videos will not trivialize science, but will instead help to change the public's attitude toward math and science. The project will "make the scientific journey available to all." Ron Howard (pictured below) said that there wasn't much science on the set of The Andy Griffith Show, but many of the films that he has directed (A Beautiful Mind, Apollo 13) have involved math and science. He explained that in A Beautiful Mind it was hard to understand John Nash's work, but it was important for the understanding of the character that the work was expressed. Before Apollo 13 an astronaut told Howard that he had a chance to show people how NASA went to the Moon, which made quite an impression on him. In making these films, Howard has discovered that people are hungry for details (when some may suspect that the films would be more dramatic if math and science were glossed over) and want to understand the science in a story. At the end of his talk, he said that video is a good way to make complex ideas come to life and he is looking forward to seeing the projects that emerge from the Creative Science Studio.

Kip Thorne (the leftmost person in the picture above left) is a former professor of theoretical physics at Cal Tech who is now working on a film with Steven Spielberg (currently titled Interstellar) that will involve some of the research he's done, on topics such as wormholes. He noted that many educational films on scientific topics, such as vortices in fluid dynamics, were made in the 1960s, so there is a need for modern video on scientific topics. One film he mentioned was a simulation of colliding non-spinning black holes by Alain Riazuelo. In general, Thorne said that math and science films are best when the experts in the field are involved from the very beginning.

Andrea Bertozzi (UCLA) began this symposium by reporting on work she and colleagues have done modeling burglaries. They took known characteristics of burglars (e.g., they tend to return to a previously burgled home or places near them) and generated discrete and continuous models of where burglaries would occur. "Hot spots" appeared in each type of model and the question is: Can the hot spots be supressed by police or will they just be transferred to another section of the city? In the model, it was the latter. Then Bertozzi compared the model with an 18 km by 18 km area of the San Fernando Valley and found that the spatial clustering in her model was in exact agreement with the data.
Mehdi Moussaid (Swiss Federal Institute of Technology) spoke about human crowd motion. Individuals in a crowd act with only local information, yet collective patterns---such as lane-forming---emerge. He showed video of crowds in Mecca and noted how an increase in density resulted in crowd motion moving from smooth flow to stop-and-go waves to turbulent motion. He hopes the analytics that he is applying to crowds will help make the movement of large groups of people more efficient.
Pierre Degond (Paul Sabatier University, Toulouse, France) studies animal and human collective behavior. Animals may provide betetr models because they are easier to study and their behavior is not affected by measurement (human behavior often is). The number of individuals involved in a group makes for a huge number of calculations, so he is using a continuous model to represent the motion of the entire group and then deducing individual behavior from it. 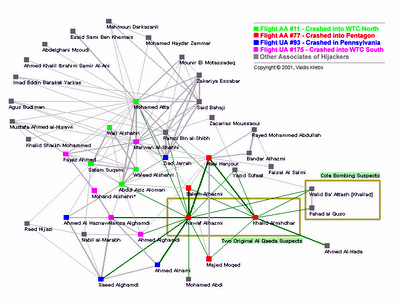 The moderator, Jonathan Farley (Johannes Kepler University, Linz, Austria) began by explaining how he got into the field of counterterrorism. He had been doing research in lattice theory when he and others at Vanderbilt University became the target of serious threats via email. Farley left Vanderbilt and was at MIT when he attended a talk on math and counterrorism, and became interested in the subject. A terrorist "cell" can be pictured as a graph, with the members as vertices and connections between members expressed as edges. For obvious reasons, cell leaders would like to minimize the number of connections but maximize the chance that the chain of command will survive should members be captured. Counterrorism agents would like to be able to find those connections in the cell, which, when severed, will disconnect the chain of command from a leader to the foot soldiers. Farley assumed that cells are partially ordered sets (although this may not be the case, he said that it was a reasonable starting point) and that anti-terrorism experts want to find cut sets so that when the vertices in the set are removed, no maximal chains persist. He pointed out that authorities can use mathematics to "fight smarter, not harder" and that mathematicians are much cheaper than weapons systems.Image note: People within two steps/degrees of original 9/11 suspects
© 2001 Valdis Krebs http://orgnet.com/tnet.html. Click on the image to see a larger version.

Keith Devlin (Stanford University), filling in on short notice, gave a talk on work he had done for the CIA a few years ago. His assignment was to find a way to help intelligence analysts do a better job---that is, get the most information from the vast amounts of data they're presented with. He remarked that today there is even more data, much of it video, which makes the job even harder.

Organizer Louis J. Gross of the University of Tennessee, Knoxville gave an overview of this symposium, saying that its objectives were to 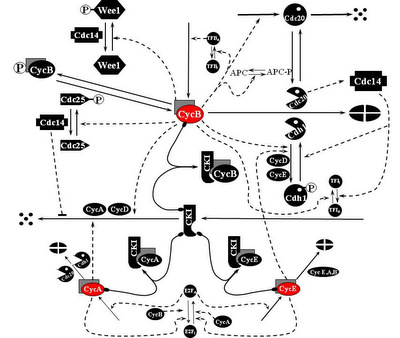 The first talk was by Sally Blower (UCLA) about an HIV model used in Botswana. An antiretroviral drug has been tested, but its efficacy is unknown becuase it can also generate drug resistance and result in people getting HIV. Blower uses optimal control theory to determine how and where to administer the drug to maximize its effectiveness.
John Tyson (Virginia Tech) outlined the complex dynamics of a cell. His goal is to understand a cell's physiology from information in its genome. He talked about cell replication and how cell network information is translated into systems of nonlinear differential equations, which describe the reaction rates. Tyson also showed interactions between cyclins and cyclin-depended kinases (CDKs). Whichever of those chemical types is more prevalent at a step drives a bistable switch that is reflected in a bifurcation diagram. (At left, The reaction network controlling cyclin-dependent kinase activities during the eukaryotic cell cycle, adapted from Csikasz-Nagy et al. (2006) Biophysical J 90:4361, courtesy of John Tyson.). Click on the image to see a larger version.

After all the talks, the speakers were asked what they do to help their students get to where they are now. Carlos Castillo-Chavez of Arizona State University, who gave a talk about modeling the H1N1 epidemic in Mexico, said that he lets his students choose their problem---a practice more common in biology than in math.

Mathematics and the Analysis of Fairness in Political Processes

This symposium had two talks in each of three categories: voting, apportionment, and redistricting.

*Voting
Don Saari (University of California, Irvine) wondered if such a thing as a fair voting system existed. He called for more rigor in the study of voting, as opposed to the current collection of examples as to why voting system A is better than system B. Although Saari had no definition for a fair voting system, he did say--à la Justice Stewart--that "You would know it when you see it."
Steven Brams (New York University) described a new voting system: satisfaction approval voting (SAV), which he called an improvement over approval voting. The method is best for multi-winner elections, such as a council race. As with approval voting, voters can vote for many candidates, but with SAV each voter is assigned a satisfaction score---the fraction of his or her approved candidates who are "elected" in each subset of candidates. The system then chooses the subset that maximizes the sum of all voters's individual satisfaction scores. Brams agreed that it wasn't a perfect system, but did say that results are independent of the number of candidates that a voter approves of.

*Apportionment
Paul Edelman (Vanderbilt University) gave a history of the different methods used to apportion seats in the U.S. House of Representatives. States' totals are chosen to reflect their proportion of the total U.S. population, but since these proportions when multiplied by 435 aren't usually integers, the problem becomes how to assign seats based on the fractional parts. Since 1930 the Hill method, championed by Edward Huntington (who served as president of the MAA, vice-president of the AMS, and president of AAAS), has been used, although Edelman said that it is biased toward large states.
Jennifer Wilson (The New College) spoke about how the Democratic party assigns delegates in the primaries (Republican primaries are winner-take-all). Delegates are assigned based on the proportion of votes that a candidate receives, but there is a minimum percentage of votes necessary to get a delegate. When the candidates who fail to make that minimum are eliminated, new proportions are determined for the remaining candidates. These proportions times the state's total number of delegates are not integers. The party uses what is known as Hamilton's method, assigning any remaining delegates in decreasing order from the largest fractional part to the smallest. Wilson used some geometry to illustrate her ideas and showed how paradoxes can arise. For example, a state's total number of delegates can increase, but an individual candidate's number of delegates from that state can decrease.

Gary Lorden (above), at Family Science Days, talking about his involvement with the television show NUMB3RS.

The 2011 AAAS annual meeting is in Washington, DC, February 17-21. The AAAS website has more information.