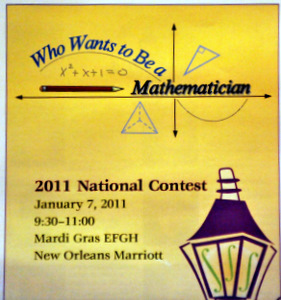 "Over 500 high school schoolmates of Anthony Grebe gathered in the auditorium yesterday to watch the competition. It was thrilling! Some other words the students used to describe the event were: suspenseful, intense, inspiring, awesome, exhilarating and cool! As a 2-12 school with no high school sports, this was our trip to the Super Bowl or our Academy Award nomination. There was all kinds of media there to cover the event. Thank you so much for giving us this opportunity to participate."

"Thank you for the opportunity. Daniel's calculus class had a great time and obviously I took you at your word and encouraged the 'cheering section' atmosphere. Thanks again for the 'fun' that you personally bring to the competition. The students brought back the excitement to the classroom. What a great way to 'sell' mathematics."

"[Evan] is an extraordinary young man, and we are all very proud of him."

"I'm so happy for Noah! What a great student!"

"Thanks a bunch for running the competition; it was a lot of fun."

In the contest, 10 students from across the country played two semifinals, of five students each. The two winners of the semifinals squared off in the finals for the grand prize. Below are the ten contestants (read more about them here).

It was pointed out at the contest that not all good math students or mathematicians are male. See the AMS poster "Women Doing Mathematics" (available free from the AMS Public Awareness Office) and the most recent regional Who Wants to Be a Mathematician for evidence.


Following the second semifinal, and in preparation for the finals, Daniel led his classmates in very entertaining cheer.

In the finals, only the first person to answer the question correctly earned points. Also question values were in the thousands, instead of the hundreds as in the semifinals. Anthony answered the first Finals question correctly and very quickly to take the early lead. Evan was the first to answer correctly on the next five questions (on algebra, geometry, number theory, combinatorics, and trigonometry), to take a sizable lead. On question seven, a difficult geometry question, Anthony was the first to signal in. He answered correctly, which put him within 5000 points of Evan. The last question was worth 5000 points. The Who Wants to Be a Mathematician crew braced for a potential tie, which would have been settled by one tie-breaking question.

Evan quickly eliminated that possibility by signaling in first and answering correctly to win the title for the second straight year.

After the contest, the contestants received awards at a ceremony presided over by Ken Ono, whose National Science Foundation Director's Distinguished Teaching Scholar Award helped pay for the contest. The contestants were welcomed and congratulated by AMS Executive Director Don McClure (below right), AMS President George Andrews (below left), and MAA President David Bressoud (below those pictures, center), who awarded Evan his first-place trophy, Anthony his second-place trophy, and Evan's mentor Zvezdalina Stankova (University of California, Berkeley) a first-place trophy, respectively. Videos and pictures from the ceremony are below.

Here are the prizes and cash won by the contestants in Who Wants to Be a Mathematician. Each cash prize is matched by an equal amount that is given to the math department of the contestant’s school.

The AMS thanks sponsors Texas Instruments, Maplesoft, John Wiley and Sons, and the National Science Foundation for their continued generous support of Who Wants to Be a Mathematician. Thanks also to judges (pictured below left) Ricardo Cortez (Tulane University), Caren Diefenderfer (Hollins University), and Bernie Madison (University of Arkansas), and to the teachers and students of New Orleans's Jesuit High School (some of whom are pictured below, right) who formed an enthusiastic cheering section.

See coverage of the contest: Of Anthony Grebe before the contest and afterwards, as well as video from the news show Sarasota County Weekly (Anthony's segment starts at about 9:30), Evan O'Dorney, Shonak Patel, and Richard Spence.

Find out more about Who Wants to Be a Mathematician and the national contest.

See other highlights of the 2011 Joint Mathematics Meetings.