Home > Giving to the AMS

. . . to honor his gift and commitment to
Mathematical Research
November 2001

Radha Govinda Laha died in July of 1999 after a long illness. After his death, I was informed that he had provided a major bequest to the American Mathematical Society for the general support of mathematical research. I was surprised to learn of that bequest ... in retrospect I should not have been. I have come to understand from his friends, colleagues, and students that his gift was a perfectly natural act at the end of a life devoted to mathematics. I want to tell you something of that life so you can understand as well.

Radha Laha was born the eldest child of a large family in Calcutta, India on October 1, 1930. His father, Narayan Chandra Laha, was a teacher of mathematics, which may partly account for his early love of the subject. He went to school in Calcutta and then to the Presidency College of Calcutta University, where he took both Science and Honors exams, earning Gold and Silver medals. Even at that early stage in his life, one of his classmates described him as "totally dedicated to his studies, particularly mathematics".

This was an especially difficult time in India?the Famine of Bengal (1943), the Japanese bombing of Calcutta (1942-44), the riots (1945), and finally Independence (1947). Radha Laha grew up in those troubled times. With no electricity he stood in line for hours each day to obtain kerosene for his family, and watched over his younger siblings with little time for himself. His family instilled in him a deep love for scholarship. He graduated with a bachelor's degree in statistics in 1949 (first in rank), a master's degree in 1951, and a doctoral degree in 1957. C.R. Rao was his advisor; Joe Doob of the University of Illinois was one of the external examiners.

Radha Laha joined the staff of the famous Indian Statistical Institute in 1952, working on pure and applied statistics. He left in 1958 to be a Research Associate at Catholic University of America in Washington, D.C., and after a brief return to the Indian Statistical Institute for two years, went to Catholic University as a faculty member in 1962. During the 1960s, his mathematical reputation spread as he visited the University of Paris and the ETH in Zurich. He moved to Bowling Green University in 1972, along with other colleagues, in order to start a new Ph.D. program. He stayed at Bowling Green, retiring in 1996.

He did research in many areas - statistics, both pure and applied, functional and harmonic analysis, even infinite dimensional representation theory. He visited MIT, the Institute for Advanced Study in Princeton, Yale University, and the Australian National University for periods of time. He was an invited speaker at several national meetings of the AMS, MAA, and IMS. He was a Fellow of the Institute of Mathematical Statistics as well as an elected member of the International Statistical Institute.

Those are the facts of his professional life, but they only tell part of the story. The rest is told by his friends and his students. Here is a glimpse of Radha Laha from one of his students, Bernie McCabe. I think you will immediately recognize the description.

Professor Laha was enormously enthusiastic about his work. His lectures were a whirlwind. With no notes, he filled the blackboard at an alarming rate; one was hard pressed to jot it all down. One time, we had a lecture series in which we took turns lecturing. When my turn came I did it exactly as my mentor would — no notes, plunging ahead furiously, covering way more than anyone else could in sixty minutes. I remember distinctly looking towards him at the end to gauge his reaction, and at that moment another graduate student remarked rather loudly that it was easy to see whose student I was. Professor Laha overheard the remark; he was delighted, bursting with pride.

Joe Diestel, a student in his graduate classes at Catholic University, confirms the breathtaking pace of lectures. He writes:

The lectures were unique. They were his read on the subject. While there were books that covered much of the material, none covered it as did he. Rich examples that came up repeatedly during the year and recent improvements of arguments, often his own, populated the course.

Diestel also relates a story about one evening class, taught for graduate students who were also full-time employees in the Washington area. An older student often nodded off to sleep in class, and one evening his snoring drew attention. Diestel writes:

Laha never skipped a beat. In his sing-song cadence he went from locally compact groups to asking the students to quietly pack their things and file one-by-one out of class, all the while continuing to speak. When at last it was his turn, he continued to speak, exited, and turned out the lights".

Radha Laha was fluent in Bengali, Hindi, French, Russian, and English, often reviewing and translating mathematical papers in all these languages. He had a keen interest in photography, Western classical music, and theater. He traveled to New York, London, and Paris to attend productions. He loved foreign films, especially French. He was an avid reader of the Village Voice, the New York Times, and the Wall Street Journal.

Professor Laha was a private person, rarely attending departmental social functions. He never drove and did not have a driver's license. He never carried a credit card. He never watched nor owned a television. He was known for his long walks, even in rain or snow or blizzard. One of his close friends from school days writes: "His simple way of life charmed me; he believed in plain living and high thinking".

Radha Govinda Laha gave his life to scholarship, and in his passing continued to give by providing an endowment to the American Mathematical Society. That endowment will grow in future years to support bright young students who follow in his footsteps, to enhance research tools for future mathematicians, and to explain to the public the value of the research to which Laha dedicated his life.

The Radha Laha Fund will help generations of mathematicians. To show our gratitude for his gift as well as his life devoted to mathematics, we are here today to dedicate the Radha G. Laha Gardens. This plaque marks a portion of the gardens outside the Society's headquarters, with the inscription "to honor his gift and commitment to mathematical research". 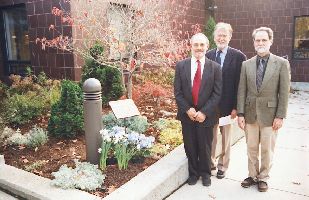 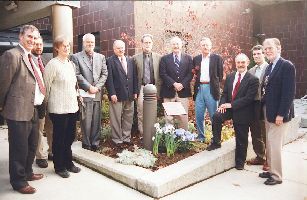 In his autobiography, the mathematician Paul Halmos began his final chapter with some advice about being a mathematician:

It takes a long time to learn to live - by the time you learn your time is gone. I spent most of a lifetime trying to be a mathematician?and what did I learn? What does it take to be one? I think I know the answer: you have to be born right, you must continually strive to become perfect, you must love mathematics more than anything else, you must work at it hard and without stop, and you must never give up.

Ladies and gentlemen, I never knew Radha Govinda Laha - I very much wish I had. But I know from his friends, his students, and his colleagues that he knew how to be a mathematician. We are grateful for his gift . . . and grateful for his life.