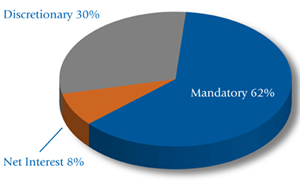 The budget process described below addresses the piece of the pie labelled "discretionary" (30% in 2020). These programs are called "discretionary" because Congress must set funding levels for them each year through the appropriations process. In contrast, we have the "entitlement" or "mandatory" programs such as Social Security, Medicare and Medicaid (the 62% wedge). Net interest (8%) has crept-up in recent years and we expect that trend to continue, thereby taking away funds from the other categories.

Of the \$79.76 billion dedicated to commerce, justice, and science, 39% (\$30.92 billion) went towards funding the science agencies, including the Office of Science and Technology Policy (\$5.5 million), the National Space Council (\$2 million), the National Aeronautics and Space Administration (\$22.6 billion) and the National Science Foundation (\$8.3 billion). NASA funding includes \$112 million for NASA's STEM Engagement Education Programs.

The total discretionary budget authority for labor, health, and human services in 2020 was \$185.09 billion in entirely non-defense funds. Within that category, the Department of Education received 39% (\$72.8 billion). Funding for higher education initiatives includes \$325 million for historically black colleges and universities and \$1.1 billion for federal TRIO programs, among others. In 2019, the Department of Education received \$71.4 billion.

The Budget and Accounting Act of 1921 requires the President to submit a budget proposal on the first Monday in February, although that process is often delayed.

The President recommends overall fiscal policy, with two main components: (1) how much the federal government should spend on public purposes, and (2) how much it should take in as tax revenues. The difference between (1) and (2) is the proposed deficit (or surplus). The president's budget is very detailed, and lays out his or her relative priorities for federal programs -- how much he or she believes should be spent on defense, agriculture, education, health, and so on.

The president's budget is only a request to Congress; Congress is not required to adopt his or her recommendations.

Step 2: The proposal moves through House and Senate committees

Only Congress can grant funding. After the President introduces a budget, it moves through House and Senate Budget Committees, working separately, to establish top-line numbers for spending, with input from other legislators, committee chairs, and party leadership.

Of the 12 subcommittees, Commerce, Justice, Science, and Related Agencies funds the NSF (take a look at the House and Senate members, see if a member of your congressional delegation is one). This subcommittee's authority includes other science-related agencies such as NASA, NIST, NOAA, and OSTP, and also the Federal Prison Industries Incorporated and the Commission on Civil Rights, among other programs.

Step 3: Congress sends budget back to the president for signature

Once the differences in the respective House and Senate versions of the 12 appropriations bills have been reconciled, they are sent -- individually or in packages (referred to as an "omnibus" if all together, or "minibuses" if in smaller packages) -- to the President for signature into law.