X-ray Crystallography and the Fourier Transform

When a monochomatic X-ray diffracts off a crystal it performs part of a mathematical operation: the Fourier transform...

X-ray crystallography has been essential, since the beginning of the 20th century, to our understanding of matter; recently, as knowledge of the chemical composition of proteins has progressed, the determination of their 3-dimensional structure has become indispensable for the correct interpretation of their functions. Our main access to this information is X-ray crystallography. (X-rays are used because their wavelengths are on the order of inter-atomic distances in molecules, in the range 1-100 Å ; one Å is $10^{-10}$m). Mathematics enters into the process at two stages. The study of space groups tells what periodic configurations are possible in three-space; in fact these are often called "crystallographic groups" by mathematicians. The other connection, the subject of this column, is the surprising and pleasing fact that when a monochomatic X-ray diffracts off a crystal it performs part of a mathematical operation: the Fourier transform (developed in the 19th century in completely different contexts); when the incidence angle is varied, the complete transform is produced. The flaw in this lovely picture is that we cannot measure all the details of the diffracted wave; otherwise the entire molecular structure could be calculated by inverting the Fourier transform.
There are many online resources devoted to X-ray crystallography; I have especially profited from Randy Read's Protein Crystallography Course and from Kevin Cowtan's Interactive Structure Factor Tutorial. Thanks also to my Stony Brook colleagues Peter Stephens and Miguel Garcia-Diaz for helpful correspondence and remarks.

(Taken as an initial distribution separately, each of the $\cos~ \frac{2\pi h}{a}x$ and $\sin~ \frac{2\pi h}{a}x$ functions determines a simple solution, as does a constant function; the linearity of the heat equation allows these separate solutions to be combined, with coefficients $a_h$ and $b_h$, to give the complete solution to the problem.)

Electron density distribution in a crystal

The dual operations of integration: $f(x)~\rightarrow~ \{c_h\}$ and summation: $\{c_h\}~\rightarrow~f(x)$ can be realized in other contexts. In this column we will consider the function $\rho(x,y,z)$ that gives the electron density distribution in the crystalline state of some compound. Suppose, for simplicity, that the unit building block, corresponding to a molecule of the compound, is a rectangular solid; say with edge-lengths $a, b$ and $c$; these $a$ by $b$ by $c$ solids are stacked in three-space so as to give a structure repeating every $a$ units in the $x$-direction, every $b$ units in the $y$ and every $c$ units in the $z$. Then the function $\rho(x,y,z)$ will be triply periodic, with periods $a, b$ and $c$, and consequently can be represented as a triple Fourier series $$\rho(x,y,z) = \sum_{h=-\infty}^{\infty} \sum_{k=-\infty}^{\infty} \sum_{l=-\infty}^{\infty} c_{hkl}e^{i(\frac{2\pi h}{a}x + \frac{2\pi k}{b}y +\frac{2\pi l}{c}z)},$$ where $$c_{hkl}=\frac{1}{abc}\int_0^a\int_0^b\int_0^c \rho(x,y,z)e^{-i(\frac{2\pi h}{a}x + \frac{2\pi k}{b}y +\frac{2\pi l}{c}z)} ~dx~dy~dz,$$ directly generalizing our formulas for the circle. If the coefficients $c_{hkl}$ are known, the electron density distribution can be calculated, and then the structure of the molecule can be determined. It is therefore remarkable that the diffraction patterns formed when the crystal is bombarded with X-rays contain precious information about the $c_{hkl}$. Roughly speaking, we can imagine the complex numbers $c_{hkl}$ placed at the vertices $(h,k,l)$ of a 3-dimensional lattice; each X-ray diffraction pattern projects this lattice onto the plane of the image plate. If we label by $p_{\Theta}$ the projection produced by a beam meeting the crystal at a generalized angle $\Theta$, a vertex $(h,k,l)$ which is good position with respect to $\Theta$ (this condition also depends on the wavelength $\lambda$ of the radiation) will appear on the plate as a spot at location $p_{\Theta}(h,k,l)$ and of intensity proportional to the square of the absolute value $|c_{hkl}|$. Varying $\Theta$ will bring a new set of vertices into good position; eventually the lattice can be reconstructed, along with the absolute value of the coefficients at the vertices.

Here is a nice example, from Kevin Cowtan's Interactive Structure Factor Tutorial. The example is 2-dimensional, and shows how rapidly the structure factors, with their phases, converge to the target structure. The target electron density function looks like this: 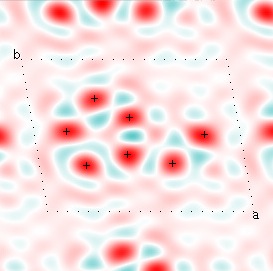 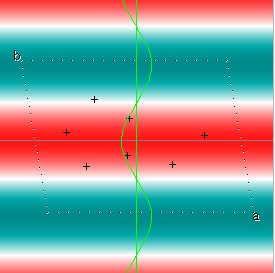 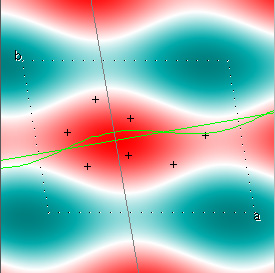 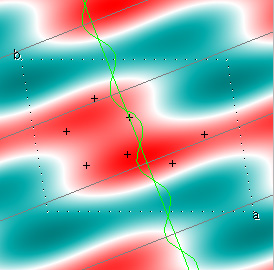 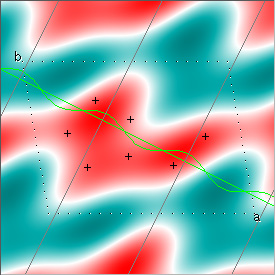 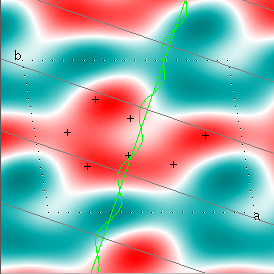 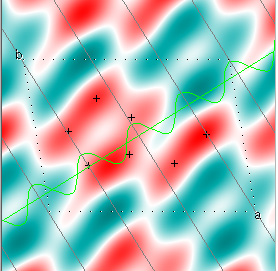 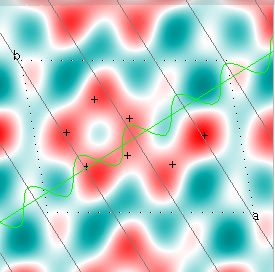