These "table texts" are the first known examples of a tradition of mathematical table-making that is still alive and useful today....

An online survey of Old Babylonian mathematics is available on Duncan Melville's website.

"Old Babylonian" refers here to the civilization that flourished some four thousand years ago (around 2000 B.C.) in what is present-day Iraq. Documents at the time were written in cuneiform ("wedge-shaped") characters on clay tablets, most of them rectangular and of a size to be held comfortably in the hand (about $5\times 8$cm or $2\times 3$ inches). Hundreds of thousands of tablets have been excavated from the ruins of this civilization; perhaps a thousand or so of these concern mathematics. For example, the collection of the University of Pennsylvania Museum of Archaeology and Anthropology, catalogued, with photographs, on the website of the Cuneiform Digital Library Initiative, includes 458 Old Babylonian mathematical tablets (of which about 110 have been published).

For Old Babylonians, mathematics was practical. Many of the mathematical tablets are "problem texts:" they contain problems or sets of problems, sometimes with solutions. Many of the problems involve geometry; the rest are almost always "word problems" where the context is the calculation of the area of an irregular field, the volume of a ditch, the number of bricks to build a ramp, ... . Understanding word problems requires, besides a knowledge of the language used to record them, a thorough understanding of the culture (in particular the different systems of units and their relation). Even the geometry problems require a specialized vocabulary and familiarity with the Babylonian way of explaining a solution. But along with the problem texts are "table texts," which can be understood by anyone who has mastered the Babylonian number system; they are the first known examples of a tradition of mathematical table-making that is still alive and useful today. 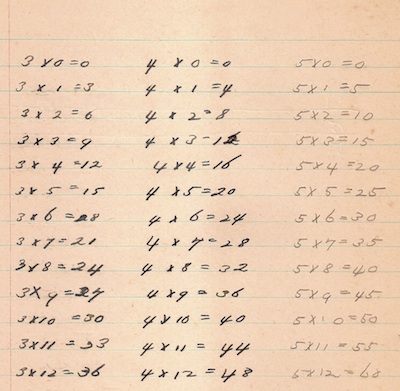 There are tables of squares, of square roots, of cube roots and of similar computations; here we will concentrate on the two most basic: multiplication tables and tables of reciprocals (for Old Babylonians, division by $n$ amounted to multiplication by $\frac{1}{n}$). The study of these texts allows us a real intellectual connection with users of mathematics who preceded the Romans by as many years as the Romans preceded us.

My thanks to Bill Casselman and to Christian Siebeneicher for furnishing me with images (and to the Yale Balylonian Collection for permission to reproduce NBC 7344); and above all to Jöran Friberg who made me a set of beautiful images of tablets from the Martin Schøyen Collection. References to "Friberg" in this text lead to his book "A Remarkable Collection of Babylonian Mathematical Texts" (Springer, 2007).

The Old Babylonian number system is characterized by three features:

In decimal notation a 10-times table is not very interesting, but in base-60 things are less trivial.

A table of reciprocals

The numbers in the standard table have the property that they and their reciprocals require no more than three sexagesimal places. If we were to try a similar construction with our decimals, the list could only include $1, 2\leftrightarrow 5, 4\leftrightarrow 25, 8\leftrightarrow 125$ and $16\leftrightarrow 625$.

The tablet shown here is MS3874 in the Schøyen collection. The transcription and (translation) are copied from Friberg.