How to Grow and Prune a Classification Tree

In what follows, we will describe the work of Breiman and his colleagues as set out in their seminal book "Classification and Regression Trees." Theirs is a very rich story, and we will concentrate on only the essential ideas...

It's easy to collect data these days; making sense of it is more work. This article explains a construction in machine learning and data mining called a classification tree. Let's consider an example.

In the late 1970's, researchers at the University of California, San Diego Medical Center performed a study in which they monitored 215 patients following a heart attack. For each patient, 19 variables, such as age and blood pressure, were recorded. Patients were then grouped into two classes, depending on whether or not they survived more than 30 days following the heart attack.

Assuming the patients studied were representative of the more general population of heart attack patients, the researchers aimed to distill all this data into a simple test to identify new patients at risk of dying within 30 days of a heart attack.

By applying the algorithm described here, Breiman, Freidman, Olshen, and Stone, created a test consisting of only three questions---what is the patient's minimum systolic blood pressure within 24 hours of being admitted to the hospital, what is the patient's age, does the patient exhibit sinus tachycardia---to identify patients at risk. In spite of its simplicity, this test proved to be more accurate than any other known test. In addition, the importance of these three questions indicate that, among all 19 variables, these three factors play an important role in determining a patient's chance of surviving.

Besides medicine, these ideas are applicable to a wide range of problems, such as identifying which loan applicants are likely to default and which voters are likely to vote for a particular political party.

In what follows, we will describe the work of Breiman and his colleagues as set out in their seminal book Classification and Regression Trees. Theirs is a very rich story, and we will concentrate on only the essential ideas.

Before we start developing a general theory, let's consider an example using a much studied data set consisting of the physical dimensions and species of 150 irises. Here are the data for three irises out of the 150 in the full data set:

Our full data set contains three species of irises---Iris Setosa, Iris Versicolor, and Iris Virginica---equally represented among the 150 irises in the set. The species will be denoted by $Y$. Here is the table above for the three irises selected from the data set of 150, but now using the variables:

From this data set, which we call the learning sample, we will construct a classifier, a function $Y=d({\bf x})$ that predicts an iris' species from its measurement vector. Ideally, the classifier should accurately predict the species of irises we have yet to meet.

Though there are many ways in which a classifier could be constructed, we will build a binary tree known as a decision tree from the learning sample. 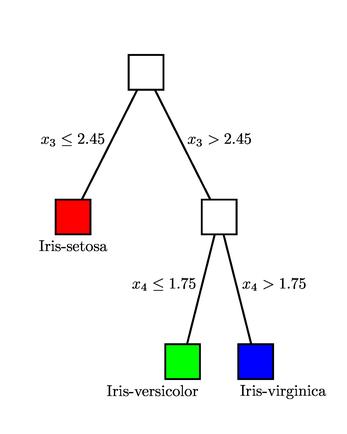 Given a measurement vector ${\bf x}$, we begin at the root of the tree. Each non-terminal node asks a question of the measurement vector. For instance, the root of the tree asks if $x_3\leq 2.45$. If the answer is "yes," we move to the left child of the node; if "no," we move to the right. Continuing in this way, we eventually arrive at a terminal node and assign the species $Y=d({\bf x})$ as indicated.

We see that the first question $x_3 \leq 2.45$ completely separates the Iris-setosa samples from the others.

Then the question $x_4\leq 1.75$ looks like the best possible split of the remaining samples.

Notice that our classifier is not perfect; however, asking only two questions misclassifies only 4% of the irises in the learning sample. If we are optimistic, we may hope for similar success with new data. Also, the decision tree reveals the role that the petal length and petal width play in the classification. 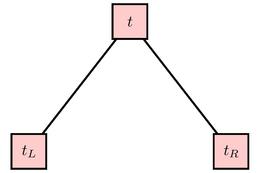 This clearly satisfies $i(t) = 0$ when all the cases belong to a single class and it has a maximum when $p(j|t)$ are all equal, meaning that each class is equally represented in ${\cal L}(t)$.

It is straightforward to see that $\Delta i \geq 0$, which means that a split will never increase the total impurity.

Therefore, the number of splits we must consider equals the number of cases in ${\cal L}(t)$ times the number of variables. Though this is potentially a large number, this process is computationally feasible in typical data sets. We therefore consider every possible split and declare the best split to be the one that maximizes $\Delta i$, the decrease in impurity.

Beginning with the root, the tree will grow as we continue to split nodes. Since we wish to stop the splitting process when we have the best possible tree, we need some way to assess the quality of a decision tree.

When all costs are equal, $r(t) = 1-\max_{j} p(j|t)$, which represents the probability that a class in ${\cal L}(t)$ is not in the largest class and is therefore misclassified.

Given any splitting of a node, it is straightforward to check that the misclassification cost only decreases after a split: $$ R(t) \geq R(t_L) + R(t_R). $$ This is intuitively clear since the chance that the class of a given case lies in the majority can only increase when the node is split.

To determine when we stop splitting, we could require that a split produces a decrease in the impurity greater than some threshold. Empirical evidence, however, shows that it is possible to have one split that produces a small decrease in impurity while subsequent splits have larger decreases. A threshold-stopping criterion would therefore miss the later desirable splits.

Due to these considerations, Brieman and colleagues instead continue splitting until $i(T) = 0$, meaning every leaf is a pure node. This also implies that the misclassification cost $R(T) = 0$.

This tree, which we denote $T_{max}$, probably overfits the data; we therefore "prune" $T_{max}$ to obtain a better tree by minimizing the cost-complexity, as we will next describe.

where $\alpha \geq 0$ is the complexity parameter. Of course, when $\alpha = 0$, $R_0(T) = R(T)$, the misclassification cost. As we increase $\alpha$, however, we begin to impose an increasing penalty on trees having a large number of leaves. Trees that minimize $R_\alpha$ will therefore have a low misclassification cost and a small number of leaves.

We seek trees that minimize $R_\alpha$ by pruning $T_{max}$. In other words, we choose a node $t$ and eliminate its children and their children and so on; in the new tree, $t$ is a leaf. For example, this tree

is obtained by pruning the tree below. 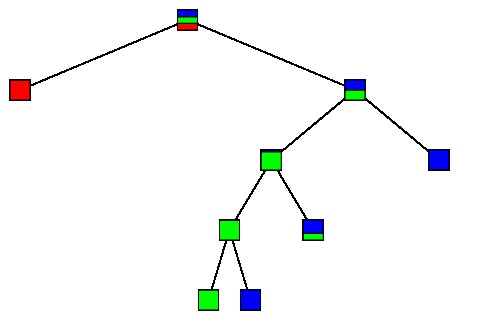 In fact, it is fairly easy to generate this sequence of trees. For instance, let's begin with $T_1$, which is obtained from $T_{max}$ by pruning all leaves that do not increase the misclassification rate.

Looking at the learning sample of 150 irises, we find the following trees:

The trees in this subsequence are our candidates for our decision tree. How do we choose which is the best?

In practice, we usually begin with a large sample that is randomly split into a learning sample and a test sample. In this case, Breiman and his colleagues describe a preferable alternative known as $V$-fold cross-validation.

As before, we find the value of $\alpha$ that minimizes the cross-validated misclassification cost and choose $T(\alpha)$ for our decision tree.

Besides laying out the construction of the decision tree as described here, Breiman and his colleagues provided a theoretical statistical foundation justifying its use. In addition, they implemented this construction in the software now known as CART and successfully applied it to situations such as the study of heart attack patients.

This technique is much more general and robust than is described here. For instance, it is possible to incorporate splits given by more general linear functions of the variables. Variables are allowed to be categorical rather than numerical, and CART deals well with cases having some missing variables. Also, the use of "regression trees" allows the predictions to be numerical rather than categorical as well.

In spite of the fact that CART was introduced some thirty years ago, its use, especially with some more recent enhancements, is still widespread today.