The Mathematics of the Rainbow, Part II

I'll first recall in some detail the steps leading to Airy's formula for the intensity of light in a rainbow, and then say something about how Airy made it possible to compare his theory to experiment...

A rough explanation of rainbows was given by Descartes in the early seventeenth century, but it did not account for all phenomena seen in them, notably the pale pink or green `supernumerary' arcs one sees below the main bow in this picture:

This photograph is cropped from Double-alaskan-rainbow.jpg, available from the Wikipedia Commons.
It is distributed under the Creative Commons Share-Alike license.

The explanation of these arcs requires the wave theory of light, and a reasonably accurate account was first put forth by the British mathematician George Biddell Airy around 1838. An earlier Feature Column discussed the elements of Airy's theory, but left much undone. This sequel will say more. I'll first recall in some detail the steps leading to Airy's formula for the intensity of light in a rainbow, and then say something about how Airy made it possible to compare his theory to experiment.

From light rays to wave fronts

The following pictures summarize the basic idea of Airy's argument.

From wave fronts to Airy's formula

A moving wave front determines the light intensity according to `Huyghen's principle,' which says that each infinitesimal segment of the front behaves independently of other segments, and as a point source of light. In our case, we are looking at a series of wave fronts like this: 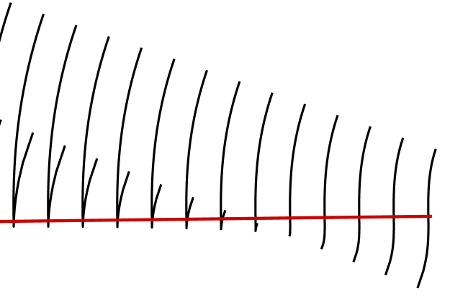 Looking at the rainbow, the observer is very, very far away. Therefore what we wish to know is how the intensity of light varies with the angle $\vartheta$ from the caustic ray. Each of the effective wave fronts will produce the same effect for the observer, but one of them, that at the far right, is by far the simplest to work with. If I choose a rotated coordinate system, it has an equation which may be approximated well enough near the $x$ axis by $$ y = -c x^{3} \quad(c > 0) \, . $$ 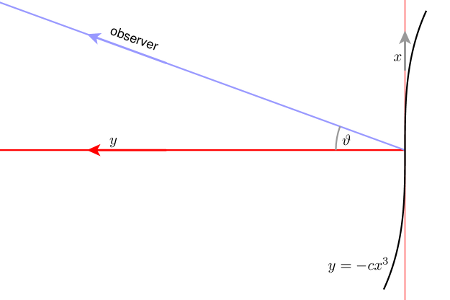 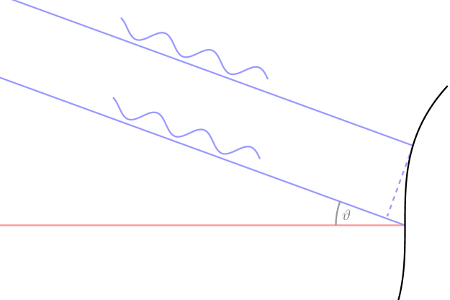 How can we calculate the total contribution?

A change of variables in the integral makes this $$ \hbox{constant} \cdot \int_{0}^{\infty} \cos {\pi\over 2} \, ( s^{3} - z s) \, ds \, . $$ This is Airy's integral formula for the amplitude of a light wave near near the caustic ray of a rainbow. In this formula, $z$ is proportional to the angular distance $\vartheta$ from the caustic ray. The constant $C$ and the ratio $\vartheta/m$ depend on a number of things I have been careless about - the wavelength of the color involved, the size of the raindrop, and the intensity of sunlight. There have been a number of approximations applied, too - primarily that the only important contributions to the integral come from small values of $s$ in this integral, which I needed in order to replace $W$ by $\infty$. This should become clearer in the next section - the rough idea is that when $|s|$ is large the function $\cos(s^{3} - zs)$ oscillates very rapidly, and positive and negative oscillations cancel out. That fairly small values of $x$ in the original integral correspond to large values of $s$ is because the diameter of a rain drop is much, much larger than the wavelength of light. Other approximations are justified by the fact that the distance from the raindrop to the observer is much larger than the diameter of the rain drop. Such intuitive approximations are at the heart of physics.

At any rate, once Airy's formula is at hand, we are faced with a purely mathematical problem: of what use is the formula?

The function $$ Ai(z) = \int_{0}^{\infty} \cos {\pi\over 2} \, ( x^{3} - z x) \, dx $$ is called (what else?) the Airy function. After Airy obtained his formula, he was faced with the problem of actually comparing what it told him with the phenomena actiually observed in rainbows. This required that he compute a range of values. This was not a trivial task, since the integral is over an infinite range, and we want to see what the function looks like over a wide range of values of $m$.

Let's begin by looking at the function $\cos (\pi/2) (x^{3} - zx)$ being integrated. It behaves quite differently for $m$ positive and negative. Here are some sample graphs:

In both cases, the graph oscillates more and more rapidly as $x \rightarrow \infty$. This explains why, at least, the infinite integral makes sense - it may be expressed as an infinite sum of terms decreasing in absolute value and alternating in sign, like the commonly seen sum $$ 1 - 1/2 + 1/3 - 1/4 + 1/5 - \cdots $$

But the graphs start out very differently for negative and positive values of $z$. The negative case is ... well, more interesting.

The short answer to the first question is, in the most straightforward way possible. That is to say, the method he used did not rely on the very special function he was looking at, but instead could have been used on any function with behaviour generally similar to that of $Ai(z)$. Airy was not an imaginative man, but he was persistent. Dogged, you might say. Sometimes doggedness is more valuable than imagination, but as Airy demonstrated later on in his life, sometimes it is an impediment.

All in all, a remarkable effort and a convincing demonstration of the validity of the wave theory of light.

To interpret this illustration, keep in mind that light intensity is proportional to the square of amplitude.

I have said that $Ai(z)$ looks very different for positive and negative values of $z$. For $z < 0$, it decreases monotonically at an exponential rate, whereas for $z > 0$ it oscillates in with slowly decreasing amplitude. (I am not aware that Airy ever even conjectured that this might be so. Later in the century, Stokes founded a major branch of applied mathematics by proving these assertions.)

Airy's derivation of his formula was perhaps the highlight of his career as a physicist. His methods of computation, and perhaps his qualities as a mathematician, did not shine so brightly. Roughly about the time he did his calculations the mathematician De Morgan suggested a far more efficient technique involving relatively simple converging power series. But De Morgan's explanation was apparently not sufficiently justified in Airy's view to make him switch steeds in mid-stream. Many years later De Morgan did manage to convince Airy of the validity of his idea, and Airy wrote a supplement to his original paper including De Morgan's justification and applying his method. Here, too, however, there was a limit to how far Airy could calculate with these series. It was George Gabriel Stokes, one of the most brilliant mathematical physicists of he nineteenth century, who saw the way out of an apparent impasse. But that is another story.