This article will describe an incredibly simple technique that vastly improves a result related to the game of SET...

A recent Feature Column explored some mathematical ideas that appear while playing the card game SET®, in which players examine a hand of cards searching for a collection of three cards that form a "set." We determined how large a hand could be if it contains no set.

In this column, we will revisit this question and describe a new application of the polynomial method introduced in May of this year (2016) that leads to powerful results about a generalized version of this question. What is most remarkable about this technique is its simplicity. Although the problem we'll describe has been well studied by number theorists for some time, we will obtain dramatic improvements in our understanding using straightforward ideas that are accessible to undergraduates.

The game of SET

To review, SET is played with a deck of 81 cards. On each is printed a number of symbols, as seen on these typical cards.

Each card is unique; the 81 cards are created by choosing one of the three possible values for each of the four features.

Three cards are said to form a set if each of the four features, considered individually, are either the same on each card or different on each card. For instance, these three cards form a set:

One obvious way to generalize this question is to change the number of features on the cards. For instance, we could add a fifth feature, such as texture, having three possible values and ask how large a hand can be if it does not contain a set.

We call such a subset $A$ an $n$-cap and use $C_n$ to denote the maximum cardinality of an $n$-cap. In our previous column, we saw that, for small values of $n$, we have

However, not much is known beyond these small values of $n$. In this column, we will investigate how these numbers grow as $n$ increases. Let's first think about what we can expect.

Shown below is an example of a 2-cap $A$, which has four elements. 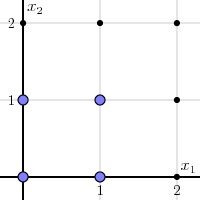 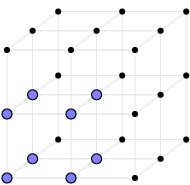 It is therefore reasonable to think that $C_n$ will at least double when $n$ increases by 1; perhaps we could even do a bit better. Shown below is a 3-cap obtained by applying an affine transformation to one of the copies of $A\subset{\Bbb F}_3^2$ and then adding another point in the third layer to obtain a $3$-cap with 9 elements. 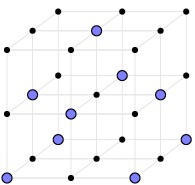 At the same time, it doesn't seem realistic to expect that we could put three copies of $A$, one in each layer, and obtain a 3-cap, even if we artfully apply affine transformations in each layer. Therefore, we expect that $C_n$ grows by a factor no more than $3$. In fact, Brown and Buhler proved this in 1982: $|C_n| = O(3^n)$.

This was improved by Meshulam in 1995. The space ${\Bbb F}_3^n$ has $3^n$ elements; Meshulam showed that the fraction of elements in an $n$-cap is proportionally no more than $1/n$. In 2012, Bateman and Katz improved this estimate by showing that this fraction is proportional to $1/n^{1+\epsilon}$ for some positive value of $\epsilon$. Until this year, their result was the best known.

We may then generalize our question to allow a larger number of possibilities for each of the features on a SET card. Allowing $q$ possibilities, we may ask: "How large can a set $A\subset{\Bbb Z}_q^n$ be for which the equation $a+b=2c$ has no solutions with $a$, $b$, and $c$ distinct?"

Solutions to this equation form three consecutive terms, $a,c,b$, in an arithmetic progression in ${\Bbb Z}_q^n$ so we call a set $A$ having no distinct solutions progression-free. The question of finding an upper bound for the number of elements in a progression-free set has a rich history in number theory. The work we'll describe in this column applies to this problem as well. We will, however, ultimately focus on the case $q=3$, which originally comes from the game SET.

In May, Croot, Lev, and Pach introduced a technique for proving that a progression-free subset of ${\Bbb Z}_4^n$ has size $O(c^n)$ for some constant $c\lt 4$. Within a few days, Ellenberg and Gijswijt independently extended their technique to subsets of ${\Bbb F}_q^n$ where $q$ is an odd prime; in particular, their results apply to the SET problem where $q=3$. We will now begin to describe this method.

To understand why, we only need to show that every function in $\mbox{Map}({\Bbb F}_q^n, {\Bbb F}_q)$ is given by evaluating a polynomial in $S_n$ since the vector spaces have the same dimension.

The evaluation map will play a significant role in our investigation into the size of subsets of ${\Bbb F}_q^n$. In particular, given a polynomial $P$ in $S_n$, we may consider its support $\Sigma$, the set of points in ${\Bbb F}_q^n$ for which $P$ is nonzero.

We will consider polynomials whose supports are contained in $C$. Since $B$ is disjoint from $C$, these polynomials necessarily vanish on $B$. By studying the degree of such polynomials, we hope to obtain a bound on $|C| = |A|$. In particular, we will demonstrate the following preliminary result:

The corresponding sets $B$ and $C$ are as shown.

We saw earlier that the rank of $R$ is equal to the number of elements of $C$ for which $P(c)\neq 0$. This means

To this end, we introduce the space $W$ of polynomials whose support is contained in $C$. Since $B$ and $C$ are disjoint, the polynomials in $W$ must vanish on $B$ so that the result of the previous section applies.

There is a polynomial $P\in V$ whose support satisfies $|\Sigma| \geq \dim V.$

Finding a bound for $m_d$ 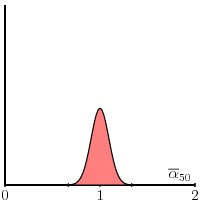 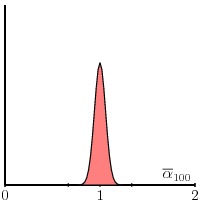 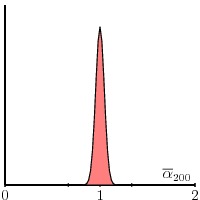 Second, the Central Limit Theorem implies that the distribution of $\alpha_n$ is increasinlgy well approximated, as $n$ grows, by a normal distribution with decreasing variance. This shows that the probability that $\overline{\alpha}_n\leq 2/3$ decreases with $n$; in fact, we will see that it decreases exponentially.

The condition that $\overline{\alpha}_n\leq 2/3$ may be estimated using the theory of large deviations, a rich, well-developed theory into which we simply dip our toes.

The paper of Croot, Lev, and Pach, which applied the polynomial method to progression-free subsets of ${\Bbb F}_4^n$, is only six pages long, speaking to the elegance and simplicity of their work. Indeed, reading it one thinks in one minute, "How did anyone think to do this?" and, in the next, "Why had no one done this before?"

Once public, the Croot-Lev-Pach paper set off a flurry of work, described by Ellenberg as "math at Internet speed," as mathematicians sought to apply this technique to a wide range of combinatorial problems. “The cap set problem we think of as a model problem for all these other questions in Ramsey theory,” says Terence Tao.

Tim Gowers wrote: "I could almost feel my brain expanding as I read Jordan Ellenberg’s preprint and realized that here was a major new technique to add to the toolbox."

In spite of the readability of the original papers and the amount written about these developments on the internet, I wanted in this column to expand some parts of the arguments so that, say, interested undergraduates could more easily participate in these ideas as they are being developed.