The Joy of Barycentric Subdivision

We shall be interested in what happens to the shapes of the triangles one gets by subdividing a large number of times. ...

Even nowadays, when so much mathematical territory has already been well explored, interesting and apparently new mathematical phenomena can arise in very simple circumstances.

The barycenter of a triangle is its center of gravity. It can be found easily by a simple geometric construction. Draw a line from each vertex to the midpoint of the opposite side. Euclid knew that these three lines meet in a single point, and this turns out to be what we call the triangle's barycenter. 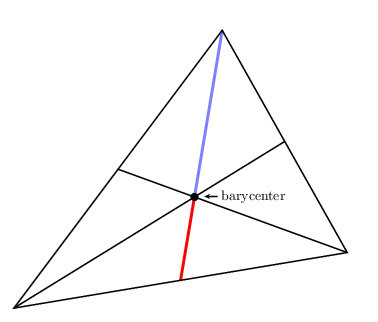 A basic fact is that the length of the blue line is twice that of the red one.

There may be interesting things to be said about how the sizes of children vary, but we are going to be interested only in the shapes, rather than the sizes, of children. More precisely, we shall be interested in what happens to the shapes of the triangles one gets by subdividing a large number of times.

One's first impression is that the triangles become more and more pinched---thinner, one might say---as subdivision proceeds. But a close look shows that this is not quite the case---most of the triangles after 3 subdivisions are fairly thin, but there are a few that are not so thin.

How can we describe what is going on? The answer will be in statistical terms. But in order to analyze what happens statistically, we need a precise way to specify the shape of a triangle.

What is the shape of a triangle?

But now we can find a standard model of any triangle, so as to be able to compare shapes. Given a triangle, first scale it so that its longest side has length one. Then rotate it so its longest side is horizontal. Rotate it again (by $180^{\circ}$) if necessary so the triangle is on top of its longest side. Flip it around a vertical axis, if necessary, so that its shortest side is at the left. The triangle we are now looking at is very special: $\bullet$ its bottom side is a horizontal segment of length $1$ (because we have scaled it suitably); $\bullet$ its top vertex lies at distance at most one from its right hand vertex (because the right side is at most as long as the bottom); and $\bullet$ the top vertex lies to the left of the center of the bottom (because of our convention regarding mirror images). If we are given a coordinate system, we may even place the bottom to be the segment from $(0,0)$ to $(1,0)$. In this way, every triangle is associated to a triangle of a very special type---one that looks like this: 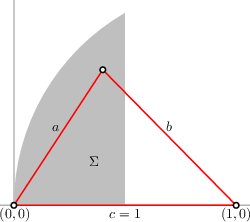 Such a triangle is completely determined by its top vertex, which lies in the region I'll call $\Sigma$ which is colored gray in the figure above. Thus we can say that two triangles have nearly the same shape if the corresponding points of $\Sigma$ are close.

The top of the region $\Sigma$ corresponds to an equilateral triangle, points on the arc at the left or the vertical line at the right are all isosceles triangles, and points towards the bottom are all rather flat. Points of the bottom correspond to degenerate or flat triangles, all of whose vertices lie on a line. 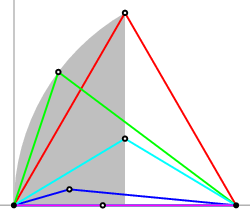 Eventually I'll want to refer to the triangles in a subdivision, and I assign labels in a somewhat arbitrary fashion as shown here: 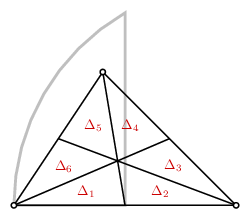 These figures exhibit a number of interesting features.