Multiplication Is Easier When It's Complex

In this article, we'll describe a clever strategy for multiplying integers that takes a detour through complex numbers and that dramatically reduces the amount of work. ...

Since multiplication represents repeated addition, it's natural that elementary students should learn addition before multiplication. But multiplication is also a significantly more involved operation. Let's look at the numbers p = 2642 and q = 5821 and compare the effort required to compute p + q and p·q using the algorithms that students are usually taught.

Both operations reduce the problem to some basic facts that need to be memorized: the addition and multiplication tables that show how to add and multiply pairs of single-digit numbers.

To add, we line the numbers up and add corresponding digits:

If we overlook the "carries," we see that adding two m-digit numbers requires us to perform m additions of single-digit numbers:

Multiplication is a bit different: we line the numbers up again, but now we multiply p by every digit in q. 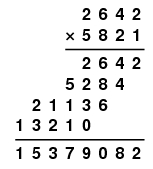 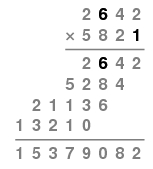 What happens if the numbers we want to multiply are very large, like these thousand-digit numbers?

There are, in fact, situations where we need to be able to work with numbers having millions of digits and perhaps more. For instance, certain encryption techniques used to protect information sent over the Internet rely on our ability to multiply large numbers. Also, a group of scientists has recently used techniques to multiply extremely large numbers (a press release states that these numbers, if written in hand, would stretch to the moon and back) to generate a huge list of so-called congruent numbers which has shed light on a very old problem in number theory (see the paper by Bradshaw et al in the references).

If p and q have millions of digits, multiplication would require trillions of single-digit multiplications. As the numbers grow large, the time required to multiply them using the traditional algorithm becomes prohibitively long. However, in this article, we'll describe a clever strategy for multiplying integers that takes a detour through complex numbers and that dramatically reduces the amount of work.

Multiplying integers is the same as multiplying polynomials

Let's look at our computation of p·q in a slightly different way. Remember what it means to consider an integer as a sequence of digits:

so if we multiply p and q:

This feels a lot like multiplying polynomials. Indeed, if we use the digits of p and q to define polynomials

The seven coefficients of R(x) will give the digits of r, at least after we perform the "carry" operations we are sweeping under the rug. It is therefore our goal to find these coefficients. Of course, we could simply multiply the polynomials; however, that is equivalent to the computation we just performed with x replacing 10 and which requires 16 multiplications of pairs of single-digit numbers. We therefore have not saved any work.

We begin our search for a more efficient method with this crucial observation: the coefficients of a degree m - 1 polynomial are determined by the polynomial's values at m points. We will come back to the example considered above in a moment; however, let us work more generally for now. We will assume that r has m digits and that p and q have m/2. Since the degree of R(x) is m - 1, we will follow this outline:

Notice that the second step only requires m multiplications; if m is large, this is much less than the roughly m2 required in the usual algorithm. If we can find an efficient way to perform steps 1 and 3, we will therefore have found a faster way to multiply p and q. (In discussions like this, we will ignore the additions required since multiplication requires significantly more work.)

We will begin by describing how to evaluate the polynomials P(x) and Q(x) at the points xs.

We will assume that we have the polynomial

Let ω = e2πi/m, a primitive mth root of unity. We wish to evaluate A at the points xs = ωs so we will refer to these values as:

This process transforms the m coefficients at into m new values as by evaluating A at the points xs. This is, in fact, a well-known transformation called the Discrete Fourier Transform and the values as are known as Fourier coefficients.

Since the number of terms in these new transforms is now m/2, we may replace s in these sums by s', the remainder when s is divided by m/2.

We will denote the first sum as a0|s' where the 0 in the subscript indicates we are using even terms. Think of this as representing the Fourier coefficient corresponding to s' when we transform the coefficients where t has a remainder of 0 when divided by 2.

In the same way, we will denote the Fourier coefficients of the transform of the odd terms by a1|s'. Here again, think of the 1 in the subscript as telling us to consider indices t whose remainder, when divided by 2, is 1.

We may then rewrite our observation above as:

The power of this observation lies in the fact that we may apply it again to compute the Fourier Transforms of the smaller sets. For instance,

It will be helpful to express the indices t and s in binary form; that is, in the following, we will consider t and s to be strings of 0's and 1's. Our fundamental observation then becomes:

In this expression, 0t is the result of appending a 0 to the left of the binary digits of t, |t| is the number of 0's and 1's in the string representing t, and s' is the new string of 0's and 1's formed by removing the left 0 or 1 from s.

If - represents the empty string, notice that

Let's see how this works with an example. Suppose that m = 4 and the coefficients at are as follows:

With one more step, we find the Fourier coefficients as:

To understand the amount of effort required in this process, let's reorganize the information into a table as shown below:

Since p and q both have four digits, we expect that r will have less than eight digits. We need m to be a power of 2 so we take m = 8 and regard our polynomials as

To evaluate these polynomials at the points xs = e2πis/8, we will apply the Fast Fourier Transform with ω = e2πi/8. Here are the steps required to find the Fourier coefficients ps

Alert readers will notice that there is some symmetry in the sequence of Fourier coefficients stemming from the fact that the polynomial coefficients are real. This symmetry may be exploited to make the algorithm even more efficient.

As will be mentioned later, this simple observation is an incredibly useful fact and one of the reasons the Fourier Transform is a ubiquitous tool in applied mathematics. We will therefore state it as a theorem. The process by which we compute the coefficients in a product of polynomials is known as convolution so we have the

Applying the convolution theorem in our example, we find

Notice that only m multiplications are needed in this step. In fact, we may think of this step as being analogous to the addition algorithm where we found p + q by adding corresponding digits of p and q. In the technique we are developing, we multiply p and q by multiplying their corresponding Fourier coefficients.

Step 3: Finding the coefficients of R(x)

Applying this to our example, we find the coefficients of R(x) as follows:

This technique, which is usually called Schönhage-Strassen multiplication in acknowledgment of its creators, represents a significant savings in effort. The traditional algorithm requires effort proportional to m2 while Schönhage-Strassen reduces this to m lg(m). Since the logarithm lg(m) grows much more slowly than does m, Schönhage-Strassen is a superior algorithm when m is large.

In our discussion, the integers p and q have been represented in base 10, using digits 0 - 9. It is, of course, possible, and even desirable, to apply this technique using different bases. In particular, choosing a base that is a power of 2 is natural since we will be performing these computations on a computer that will represent the integers in binary form. A careful analysis of the algorithm reveals optimal values for the base.

The Fourier Transform is a fundamental tool in mathematics and its applications for it provides a means of understanding periodic phenomena. For example, it plays an important role in the theory of digital electronics and, in particular, digital music. However, it is the Fast Fourier Transform that enables this theory to be put into practice; the Schönhage-Strassen technique is, in fact, one that is much more widely applicable, in broad outline at least.

For instance, digital signals are frequently "filtered" by convolving the signal with another signal having specific characteristics. As we've seen, convolution is a computationally intensive task; however, the Fast Fourier Transform and the Convolution Theorem give a practical means of convolving signals by multiplying the Fourier coefficients of the signals.

In this way, the Fast Fourier Transform has played a fundamental role in the development of new communications technologies. Though this technique is often credited to a 1965 paper of Cooley and Tukey, the essential idea of the Fast Fourier Transform, computing Fourier coefficients through a recursive process, was used by Gauss in 1805 to calculate the orbit of the asteroid Pallas and has appeared in many forms over the past two centuries.