With JAVA animation by Bill Casselman

2. A conversation in a railway carriage

In 1872 Kelvin was preoccupied with the tidal prediction, and in particular with the problem of summing a large number of harmonic motions with irrationally related frequencies. Here is how the solution came to him, in his own words (Mathematical and Physical Papers, Vol. VI Cambridge 1911, p. 286).

The model was soon succeeded by the First Tide Predicting Machine, which was completed in 1875, and could sum 10 tidal constituents. It was succeeded in turn by a second (about 1880), a third (about 1883) and a ``Fourth British Tide Predictor'' (1910). The machine illustrated here is the third. 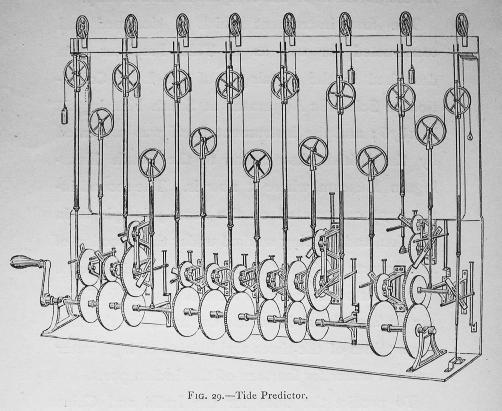 The functioning of this mechanism, and the way in which the various constituents contribute to the tide, are illustrated in a JAVA applet contributed by Bill Casselman of the University of British Columbia.