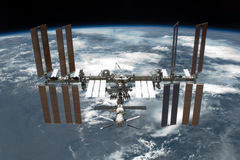 Although no one has to parallel park the International Space Station, it and other spacecraft often require precise steering movements to rotate from one orientation to another. These rotations are not simple, involving movement through three dimensions. Some spacecraft use thrusters to execute a maneuver, while others use angular momentum stored in gyroscopes or similar devices. The spacecraft’s flight software performs the necessary calculations, typically using quaternion algebra (based on an extension of the complex numbers) to find a path to reorient the craft. Minimizing fuel and time, neither of which is unlimited, requires finding optimal paths that are determined by solving ordinary differential equations.

An additional difficulty in performing precise maneuvers in space is error, which can arise when capsules dock, thus changing the physical properties--such as axes of symmetry--of the docked craft. A method called the Optimal Propellant Maneuver is robust in that its effectiveness is not diminished when mass properties are altered. And, as the name suggests, it uses thrusters very efficiently, saving 2500 pounds of the International Space Station’s fuel and millions of dollars in the past year alone. These maneuvers, computed with linear algebra and function approximation, are done with far fewer thruster firings. This means less structural load on the space station, which has extended its life.