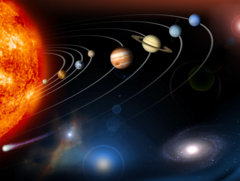 Discoveries about our solar system come principally from astronomy and cosmology, but math plays a role, too. The existence of the planet Neptune was predicted by mathematicians, based on Newton’s law of gravitation, before anyone even dreamt of an eighth planet. Recently, integral and differential equations, along with mathematical models, have dramatically increased the accuracy of estimates of the length of Saturn’s day. And applying probability and statistics to the chemical composition of simulations of growing planets early in the solar system’s history have bolstered the impact theory about the Moon’s origin.

Earth’s orbit is almost completely determined by the Sun’s gravity, but our path through space is also affected by the pull of other planets and the Moon. Unfortunately, explicitly solving the equations associated with the gravities of many bodies is impossible. So researchers are using numerical approximations and nonlinear dynamics to see if the tiny effects of interacting planetary gravitational forces will accumulate and eventually alter the solar system’s stability. They’ve determined that there is a very small chance the effects could accrue and result in planetary collisions. No need to relocate just yet, though, as this could take billions of years.