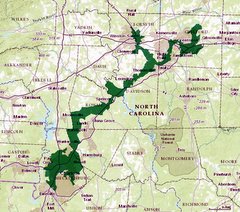 The boundaries of a state’s legislative and congressional districts are most often controlled by the party in power in that state at the time of redistricting. As you might expect, the party does its best to create districts that maximize its own power. Creating bizarrely shaped districts that give a party an unfair advantage, however, is called partisan gerrymandering. Mathematicians are working with political scientists to incorporate geometry and computing power to create millions of redistricting schemes for a state and assign measures of irregularity to each scheme. That way proposed redistricting plans can be compared with the computer-generated possibilities and the highly unfair plans will stand out and be rejected.

A district may look strange but still be deemed legal if its defenders successfully argue that its shape results from legitimate principles, such as geographical considerations or requirements of the Voting Rights Act. Ideally, mathematical metrics for districting would take these and other factors, including geometric ones, into account. A new criterion, the efficiency gap, measures partisan asymmetry based on a formula that counts the two-party difference in “wasted votes” to see whether one party has rigged an advantage for itself. A federal court recently rejected a legislative redistricting plan in part because its efficiency gap was much higher than that of other plans. In general, proving that gerrymandering has occurred in a particular plan can involve many metrics and experts from several fields, including mathematics. Relying on these collaboratively generated ideas can not only help courts decide when redistricting is illegal but also wouldn’t be a bad idea for the legislators who create the districts in the first place.