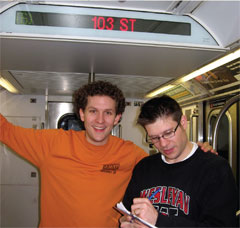 With 468 stops served by 26 lines, the New York subway system can make visitors feel lucky when they successfully negotiate one planned trip in a day. Yet these two New Yorkers, Chris Solarz and Matt Ferrisi, took on the task of breaking a world record by visiting every stop in the system in less than 24 hours. They used mathematics, especially graph theory, to narrow down the possible routes to a manageable number and subdivided the problem to find the best routes in smaller groups of stations. Then they paired their mathematical work with practice runs and crucial observations (the next-to-last car stops closest to the stairs) to shatter the world record by more than two hours!

Although Chris and Matt’s success may not have huge ramifications in other fields, their work does have a lot in common with how people do modern mathematics research:

Finally, they also experienced the same feeling that researchers do—that despite all the hours and intense preparation, the project “felt more like fun than work.”