Bryna Kra Gives the Fall 2013 Arnold Ross Lecture in Chicago, Followed by Who Wants to Be a Mathematician

"Thanks again for a terrific event. The contest was great, and the kids are still talking about the lecture. I think Dr. Ross would have been happy to know that such a terrific lecture series encourages kids to do mathematics." 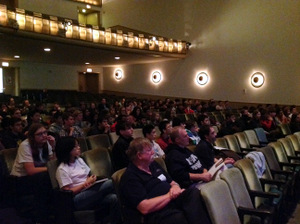 "My students who attended had a great time, and appreciated having Dr. Kra there to speak."

"This is a great opportunity for math students, it certainly was for me and my class. We enjoyed the lecture. It gave me a chance to talk with my students about how math is a living subject (theorems that are not proven yet, or even discovered) and creative and imaginative (most people don't put creativity and math together...) I enjoyed the lecture--accessible to the students, perhaps inspiring for many. And the game was great. Thanks again."

"It was a great time and the kids very much enjoyed it!"

About 150 Chicago-area high school students and their teachers got the chance to hear about some exciting mathematics during Bryna Kra's Fall 2013 Arnold Ross Lecture, "Patterns and Disorder: How Random Can Random Be?" The lecture took place at Chicago's Museum of Science and Industry on November 7. Following the lecture, eight of the students played Who Wants to Be a Mathematician. Here's a slideshow from the day.

The Arnold Ross Lecture: Patterns and Disorder: How Random Can Random Be?, Bryna Kra, Northwestern University


Kra began her lecture by giving dictionary definitions of "pattern" and showing examples of periodic and non-periodic patterns, some of which involved numbers, while others were geometrical.

She then gave definitions of "disorder" and "random" and showed how collections--such as the one pictured above right--could appear to be without order but upon closer inspection they reveal that they do have patterns. After discussing several examples, Kra closed with a theorem and two conjectures. She first cited the Morse-Hedlund Theorem, which states when a sequence over a finite alphabet (such as {0,1}) is periodic, and noted that no one knows if the theorem extends to two-dimensional arrangements of finite alphabets. Kra said that she expects that one of the students in the audience would resolve the conjecture. Then she put up a slide showing a conjecture of Erdős, which says that if A is a sequence of positive integers such that the series formed by taking reciprocals of each term diverges, then the original sequence must contain arbitrarily long arithmetic progressions. The Green-Tao Theorem shows that the set of prime numbers satisfies the statement.

During the question-an-answer period that followed, a student asked Kra how she got interested in patterns. She responded that her interest stems from a series of lectures on patterns that she heard at Stanford University that were "the most beautiful lectures she'd ever heard."

Following a break in which audience members had the opportunity to consume special AMS 125th anniversary cookies, eight of the students (who were chosen a few weeks earlier) played Who Wants to Be a Mathematician. 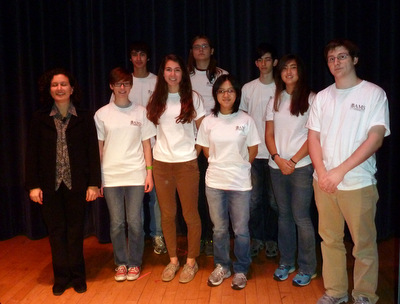 Here are videos of the games:

Rileigh and Anton both missed on their first attempt at the question, but Anton was first to be correct on the second try and advanced to the Bonus Round, which was a question about integer-lengthed sides of right triangles. Anton had three minutes but didn't need nearly that much time, finishing figuring and thinking in about half the allotted time. The audience was split on the correct answer but Anton was sure and gave a nice explanation of the question and why only one choice could be correct. It was sound reasoning and the choice was indeed correct, bringing Anton's total winnings to $3000. 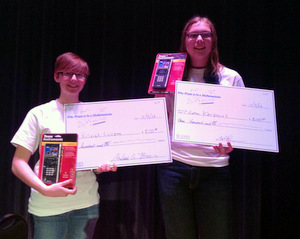 The AMS thanks sponsors Texas Instruments, Maplesoft, and John Wiley and Sons for their continued generous support of Who Wants to Be a Mathematician. Thanks also to the Chicago Museum of Science and Industry for hosting the event and to Sebrina Williams of the museum who helped arrange everything.