Who Wants to be a Mathematician in Birmingham, Alabama

David Harris of Vestavia Hills High School won $2000 when the AMS game Who Wants to be a Mathematicianwas held at Samford University in Birmingham on November 4. Eight Birmingham-area students (pictured below) participated four at a time in the two games that day.

Both games were closely contested with the game winners determined by their answers on the last question. Daniel James of Jefferson County International Baccalaureate School won the first game, but missed his bonus question. David Harris was the winner in game two and earned the $2000 prize by answering his bonus question correctly. By winning their games, Daniel and David qualified for the Who Wants to be a Mathematician Tournament of Champions game to be held on January 6 at the Joint Mathematics Meetings in Atlanta. 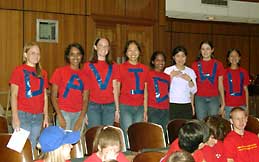 It was quite an enthusiastic crowd that witnessed the games at Samford. Supporters of David Harris and Ivy Wu, both students at Vestavia Hills High School, are pictured here spelling out the names of their two classmates participating in the game.

The contestants and their prizes are listed below.

The cash prize and What's Happening in the Mathematical Sciences were furnished by the AMS. Maplesoft donated the mathematical software Maple 9.5; Texas Instruments donated the TI-89 Titanium graphing calculators; and John Wiley & Sons donated the calculus text and access to the Machina website.

Congratulations to all the contestants and thanks to the Samford University Department of Mathematics and Computer Science for hosting the event and providing snacks and refreshments between the two games.