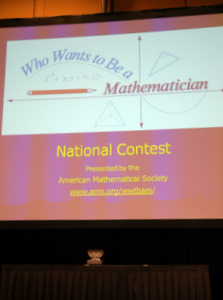 "I can't thank you enough for all that you have done in putting together this contest--what a great way to promote mathematics!"

"My students really enjoyed the competition. Overall, it was a great opportunity to expose my students to math outside the classroom and inspire many of my students to work hard. Thank you for all your hard work in organizing Who wants to Be a Mathematician. And, WOW, Evan is amazing."

"The contest was... a blast, to say the least! Thank you for organizing it! I wish you good luck in extending it and making a regular event at the AMS/MAA meetings every year. I hope more research mathematicians are encouraged to come and watch in the future, as this will bridge more of the bright high school students with prominent mathematicians."

"Thank you so much for the honor of participating in Who Wants to Be a Mathematician. The game was thrilling, the questions were exciting, and the memories are amazing. From the math talks to the clam chowder on Fisherman’s Wharf to the actual competition, the entire weekend was so wonderful, and you and the American Mathematical Society have given me an experience I will never forget."

In the contest, 10 students from across the country played two semifinals, of five students each. The two winners of the semifinals squared off in the finals for the grand prize. Both semifinals were very exciting: In each, two contestants tied for first, so a tie-breaking question was used to determine the finalists. Below are the ten contestants (read more about them here).

In the finals, only the first person to answer the question correctly earned points (similar to the format of the tie-breakers). Evan amazed the audience with his quickness, and his correctness, and won the finals over Ben. The only time Evan was judged wrong, it turned out that he was right (because of a rearrangement of the choices the night before and not remembering to register the rearrangement on the judges’ printouts). Evan wisely stood by his mathematical guns on that question and explained his answer beautifully and received his deserved points. Before the last question, he had already clinched the championship, but he answered that one correctly, too.

Evan and Ben each received a Klein bottle (one is pictured below) from Cliff Stoll in addition to their other prizes. 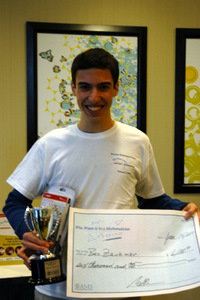 Here are the prizes and cash won by the contestants in Who Wants to Be a Mathematician. Each cash prize is matched by an equal amount that will be given to the math department of the contestant’s school. In Evan’s case, since he is home-schooled, the money will go to the Berkeley Math Circle.

The AMS thanks sponsors Texas Instruments, Maplesoft, John Wiley and Sons, and the National Science Foundation for their continued generous support of Who Wants to Be a Mathematician.

See other highlights of the 2010 Joint Mathematics Meetings.