Who Wants to Be a Mathematician at the University of Puerto Rico, Mayagüez

Number Theory and Partitions: The legacy of Euler, Ramanujan and Dyson, and beyond by Ken Ono

Ono told the audience made up of high school students and teachers that his talk was "a collection of stories." He began by showing pictures of Leonhard Euler, Srinivasa Ramanujan, Albert Einstein, George Andrews, and Freeman Dyson. For each picture he asked how many in the audience recognized the person. Everyone recognized Einstein, but not as many recognized the other people. Ono identified each man, described some of his work, and subsequently included each person in the stories he told. 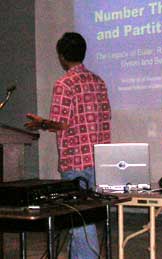 In the early 1900s, Ramanujan proved three congruences about partitions involving mod 5, 7, and 11 (one is that for every positive integer n, 5 divides the number of partitions of 5n + 4). In 1944, Dyson conjectured that there was a "statistic" which he called the crank that implied Ramanujan's congruences. Ten years later, Atkin and Peter Swinnerton-Dyer proved the conjecture. At the time of the conjecture, Dyson did not know what the crank was or if it existed. He concluded his paper with, "May it [the crank] be preserved from the ignominious fate of the planet Vulcan." Ono pointed out that this was not the Star Trek Vulcan, but instead was a planet conjectured to exist inside the orbit of Mercury. Vulcan's existence was postulated in order to explain the discrepancies between the observed orbit of Mercury and predictions based on Newton's laws. Later these discrepancies were explained by Einstein's general theory of relativity. In 1988, Andrews and Frank Garvan saved the crank from the fate of Vulcan and found the crank function.

For a long time it was thought that Ramanujan's three congruences were the only such congruences, and in fact this belief led to the use of partitions in cryptography, but such is not the case: A. Oliver Atkin found another congruence in 1968 and in 2000 Ono himself proved that there are infinitely many such congruences. Ono concluded his talk by noting that earlier this year, Karl Mahlburg, one of his graduate students, proved that all of the congruences can be explained by the crank function. It was one more captivating story about partitions, an idea which is easy to state, but which is hard to calculate.

There was a break following the talk, with food and drinks provided by the Department of Mathematics. Ono talked with the students and teachers, and signed a few autographs. 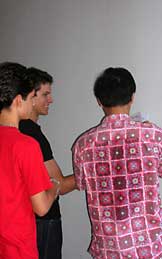 Uroyoán R. Walker-Ramos of the University's Department of Mathematics provided translation (in Spanish) during the talk and the game, which allowed everyone to enjoy both. 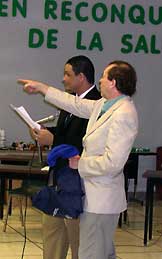 Then, eight contestants listed with their schools and pictured below with Walker-Ramos and Mike, played two games of Who Wants to Be a Mathematician. 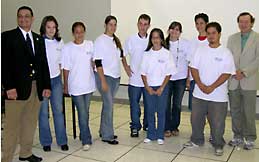 The winners in the two games were Luis and Edwin, who thus earned the right to answer the bonus question, worth $1500.

Unfortunately neither winner got the question correct, but all contestants received prizes. Each contestant's prize is listed below. 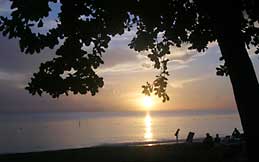 Photographs by: Who Wants to Be a Mathematician judge and co-creator Bill Butterworth of the DePaul University Department of Mathematical Sciences, and Sandy Frost and Mike Breen of the AMS.