"Two of our teachers made it. I got the full story from them and Andrew and it was really exciting!! He won in dramatic fashion! We made a big announcement about it at lunch and the entire school was thrilled for Andrew." --St. Albans School 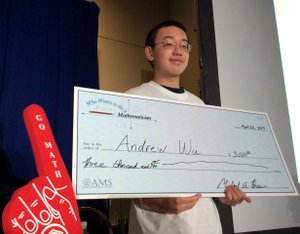 Andrew Wu, a sophomore at St. Albans School, won $3,000 playing Who Wants to Be a Mathematician at the 2017 National Math Festival in Washington, DC on April 22. Here's a video of Andrew just after his win:

Andrew was one of six contestants from the District of Columbia, Maryland, and Virginia who participated in the game at the festival. The six qualified in fine fashion as between them they missed only one question on the qualifying test, and they provided plenty of excitement as a close game ended with Andrew taking over first place on the last question. The festival itself was exciting as well, drawing over 20,000 people for the exciting activities and lectures. A slideshow of photos from the festival and of Washington, DC is below. 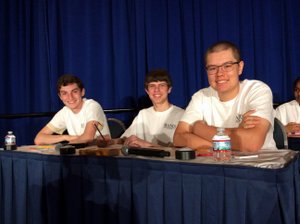 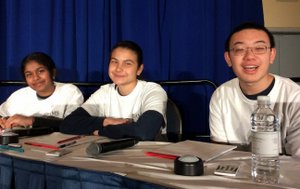 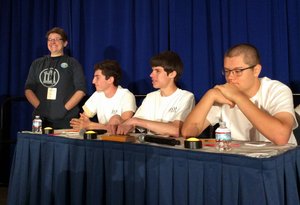 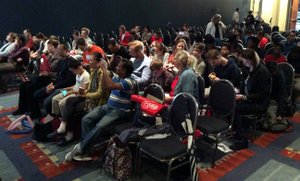 Flickr slideshow of contestants getting certificates, along with a couple of other photos from the game 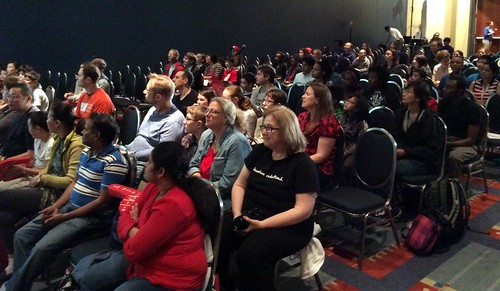 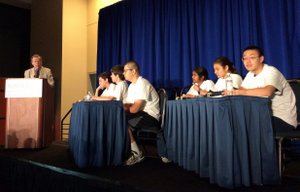 Four of the contestants--Josh, Kyle, Pravi, and Andrew--were tied for first after the first five questions. Pravi and Andrew both answered the next question correctly, so it was a two-way tie for first going into question seven. Andrew, Kyle, and Pravi answered the question correctly, so Andrew and Pravi remained tied for first going into the last question, with Kyle right behind. Then Andrew, Kyle, Josh, and Natalia gave the correct answer for question eight about roots of polynomials. The result was Andrew taking first place and earning $1,000 from the AMS and a TI-Nspire CX from Texas Instruments, along with a chance at the $2,000 Bonus Question. Kyle (below) won second place, which earned him $500 and books, both from the AMS. 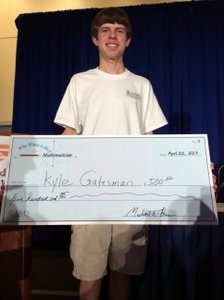 Most game shows would go to a commercial at that point, but Who Wants to Be a Mathematician, being live, does not have that luxury. Instead there was a rest room break before the Bonus Question, which allowed those in the audience to ask about the game and to find out how the contestants figured out question eight. After the break, Andrew got ready to answer the Bonus Question, which was about numbers. It was a pretty difficult question, but he answered quickly and correctly, which brought his cash total for the day to $3,000.

Here are videos from the game action:

Below are the cash and prizes awarded to the contestants.

The day before the game, Pravi--who is only a seventh grader-- and Andrew appeared on WJLA's Good Morning Washington with Science Cheerleader Lauren Pencek to talk about the game and the festival. Part of the appearance involved playing a mock version of the game (no $3,000 prize) with two of the show's on-air personalities. Pravi teamed up with one host, while Andrew paired off with the other. In the video, you'll see (or can guess) who each team's star was. 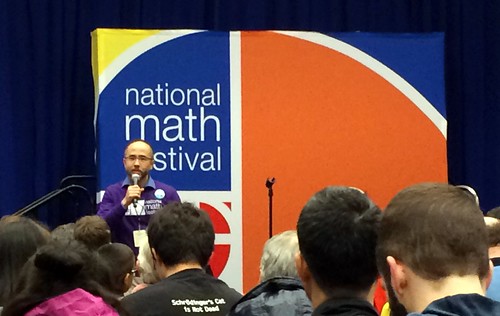 Thanks very much to our sponsors: Maplesoft, the Who Wants to Be a Mathematician Technology Sponsor; Art of Problem Solving, the Online Community Sponsor; Texas Instruments; and John Wiley and Sons. Thanks also to Catherine Roberts who, although she seemed to be in five places at once that weekend, made it to the game on time and handed out goodies.

Find out more about the National Math Festival. 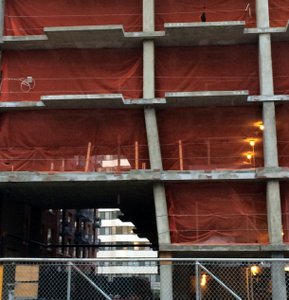 Things can change quickly in Washington.
Here construction, presumably top-down, adapted to a shift of the base to the right.