Rhode Island high school student Alexander Marcus won the AMS-donated Grand Prize of $1,000 in the final round of Who Wants To be A Mathematicianheld on Pi Day (3/14) at Providence College. This is the third year the AMS has organized the game for top math students in the state. AMS Public Awareness Officer Mike Breen quizzed 10 contestants while entertaining the audience of classmates,teachers, parents, Providence College faculty, and AMS staff. The contestants' fellow classmates were also entertaining, with their creative math club t-shirts,banners, mascots and cheers. Local businesses Pizza Pie-er and LaSalle Bakery donated gift certificates, which added to the high spirits on Pi Day. 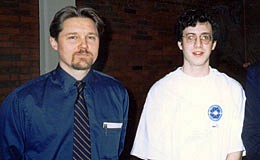 Four students qualified to face the questions alone in the "hot-seat" Bryan Cole (Bishop Hendricken High School), Rebecca Arvanites (Lincoln School), John Hawley (Toll Gate High School), and Meredith Uhl (Mount Saint Charles Academy). Bryan nearly made it to the top and most difficult question 15, but he stopped at question 14 and walked away with a number of prizes including a TI-89 graphing calculator from Texas Instruments,books from John Wiley & Sons and the Mathematical Association of America (MAA), journal subscriptions, and AMS posters and t-shirts. All the students used "lifelines"--ask the audience, 50-50, and ask your teacher--but most didn't make it up to the final difficult set of questions--this year. However, as five of the ten students qualified for and played last year, we expect some to try again and return next year. Game creators Mike Breen and Bill Butterworth (Barat College of DePaul University) will have a whole new set of challenging pre-calculus questions lined up.

This was Alexander's third year as a contestant--and he is only in tenth grade! A student at The Wheeler School in Providence, he also qualified to be invited to take the prestigious U.S.A. Mathematics Olympiad, a six question, two-day, nine-hour essay/proof examination. His teacher is George Lewis. The other students who competed in the final "all play round" with Alexander were: Ashley DaSilva (Cumberland High School), Brian Marsland (East Providence High School), Nick Mandler (Portsmouth High School), Nate Warner (Mt. Hope High School), and Alexander Washburn (Rocky Hill School).

All of the teachers and students are to be congratulated for participating in this year's Who Wants To Be A Mathematician. It's a tough game because of both the progressively difficult questions covering a wide range of topics and the stress of "performing" on stage. Yet it's possible to win the Grand Prize because Alexander did so this year and others have won in the past.

The AMS Public Awareness Office thanks Providence College for hosting the game, and thanks all the prize donors--Texas Instruments, John Wiley & Sons, MAA, Waterloo Maple, Inc., Pizza Pie-er, LaSalle Bakery, and of course the AMS--for supporting this program and such mathematically talented high school students.