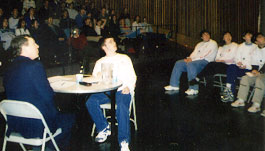 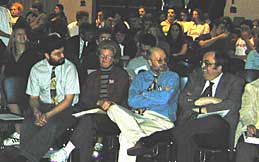 On Pi Day (3/14), the AMS ran Who Wants To Be A Mathematician, hosted by Providence College. Ten Rhode Island high school students qualified to compete for the $2,000 grand prize donated by the AMS. Those students who answered the "Fastest Finger" questions the quickest competed in rounds featuring increasingly difficult questions in the areas of algebra, geometry, trigonometry, logic and history of mathematics. Master of ceremonies Mike Breen, an AMS Public Awareness Officer, and Bill Butterworth, Chair of the Mathand Computer Science Department at Barat College of DePaul Universitywrote the questions--from the basic to the complex, some tricky. Breen provided lots of amusing banter along the way,while busloads of classmates from schools across the state, parents and teachers (as well as some Providence College math students to help with the "Ask the Audience" lifeline) had a good time, cheering and playing along with the contestants. Over the course of the five rounds all three lifeline options were used, but alas no one won the $2,000 prize--this year. Based on the repeat qualification of three of the contestants, there's a chance that they or other contestants will compete again next year for the grand prize.

All the contestants received a bag of mathematical gifts including an icosahedron from the MAA; a pen and water bottle from the AMS; a poster and T-shirt from the software company Waterloo Maple; a gift certificate from Pizza Pie-er (located in Providence); and The Joy of Pi, a book by David Blatner, published by Walker Books.Three students in the audience, whose names were chosen at random by Providence College Math and Computer Science chair Frank Ford, won gift certificates for pies from LaSalle Bakery of Providence and a Maple Student Edition donated by Waterloo Maple. After the game students were heard discussing the questions and answers--proof that the game was not only fun but thought-provoking.

The other students who participated were: