The contestants in the game, pictured below with game emcee and AMS Public Awareness Officer Mike Breen, were (in alphabetical order): 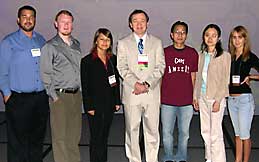 The six played an exciting game in which Karl, Julijana, and Matt were tied for first for the first six questions. Then Jason took over first place by being the only contestant to antidifferentiate an inverse trig function correctly. After a question from abstract algebra, Karl and Julijana were back in the lead, tied for first place.

The tenth and final question in the round was from multivariable calculus, and all six contestants impressed the audience by getting it right. This left Karl and Julijana tied for first, which necessitated a tie-breaking question.

Julijana was the first to get a tie-breaker correct, so she went on to the bonus round and a chance at $2000.

The bonus question was to find the closed form for a given power series. Julijana worked very hard on the question, then asked her friend Carlos for "Help." He was helpful, but unable to provide any preference between the two possibilities, B and C, that Julijana had her choice narrowed down to. After Julijana made her choice but before it or the answer was revealed, the mostly non-mathematical audience was polled. There was no overwhelming favorite, but B received the most applause.It turned out to be the correct answer, but unfortunately, Julijana had chosen C and so did not win the $2000. It was a tough question, however, and she did win a TI-89 Titanium graphing calculator from Texas Instruments. The other prizes and their winners are: