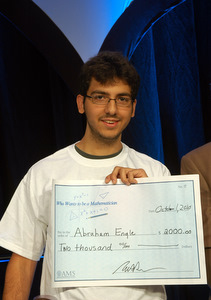 Approximately 2000 people saw Abraham Engle of Tulane University win US$2000 from the AMS and a TI-Nspire graphing calculator from Texas Instruments playing Who Wants to Be a Mathematician at the 2010 SACNAS (Society Advancing Hispanics/Chicanos and Native Americans in Science) national conference in Anaheim, California. Abraham's goal for the money? "Pay off some debt." Presumably the calculator will help figure out just exactly how much of the debt. Below is a video interview with Abraham.

Six undergraduates who were attending the conference played this edition of Who Wants to Be a Mathematician, answering questions from undergraduate mathematics courses, such as calculus, linear algebra, and differential equations. The game was held during the breakfast session on Friday, October 1.

It was a very tight contest. David was the early leader, answering the first four questions correctly. David also played in the 2009 contest at the SACNAS conference and used last year's champion, Cory Colbert, as his helper. Cory came in handy, giving David the correct answer on a math history question. Brian went into the lead after question five, with Abraham right behind him. That held for the next two questions, but Kelsy vaulted into second place after question eight (of the nine-question game). Going into the last question, which concerned iterations of the tangent fucntion, 400 points separated second place from fifth.

On the last question, Abraham answered correctly to tie Brian for first place, so a tie-breaking question was used to determine who would have the chance at the $2000 bonus question. Abraham signaled in first with the correct answer and earned the chance at the question.

On the bonus question, Abraham answered almost as quickly a he did on the tie-breaker. The audience was split on which of the five choices was correct, but Abraham's choice was the right one and he earned the $2000! (not factorial) 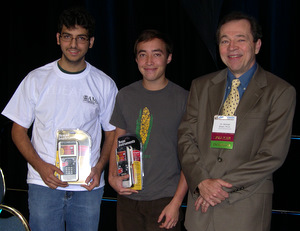 Below are the prizes won by all six contestants:

Thanks to Ricardo Cortez (Tulane University) and Ivelisse Rubio (University of Puerto Rico) who helped with the many logistics necessary to hold the game at the SACNAS national conference, in particular for their help with the qualifying test. Thanks also to the SACNAS staff, especially Lin Hundt and Jenny Kurzweil, and to the terrific audio-visual crew there. The AMS also thanks sponsors Texas Instruments, Maplesoft, and John Wiley and Sons for supporting Who Wants to Be a Mathematician.