Steven Raphael, a junior at The Roeper School, won \$3,000 playing Who Wants to Be a Mathematician at the University of Michigan-Dearborn on April 29. Here's Steven being cheered just after his victory.

Over 150 Dearborn-area students and teachers came to the game, which was preceded by a talk given by Yunus Zeytuncu of the UM-Dearborn Department of Mathematics and Statistics. 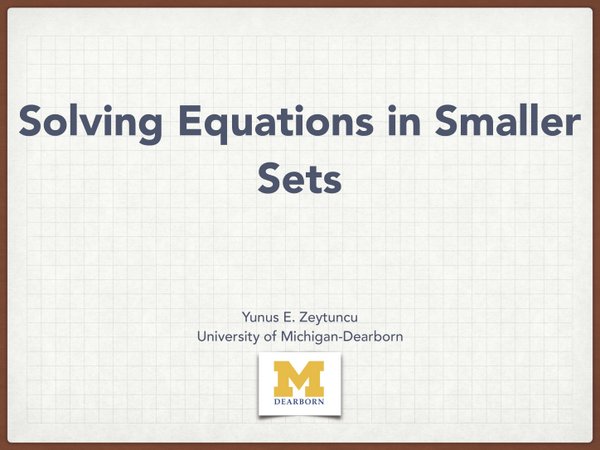 Throughout the talk, Zeytuncu involved the audience, by asking many questions and giving the students time to think and answer. He began by posing some questions about solving a system of four equations--first only giving them one or two equations to show that without all the equations there may not be a unique solution--which he related to how scanners at the airport work (simplified diagram below left, for which signals go from left to right and top to bottom). Then he moved to what kind of prices were possible in a hypothetical country that had only two denominations (4 and 7 for the slide below) and after some discussion arrived at "What is the largest amount that is impossible to get exactly using the two denominations?" This problem has a nice algebraic answer: If the denominations, p and q, are relatively prime (share no factor besides 1), then the largest price that can't be made with combinations of the two coins is pq - p - q. So, for 4 and 7, the largest unattainable price is 17. 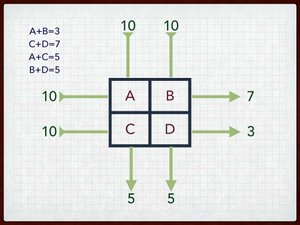 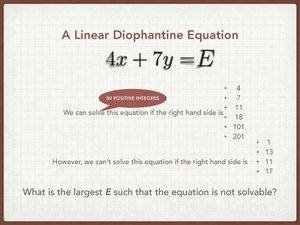 This led to a nice extension of the two-denomination-coin problem: the Chicken McNuggets problem, a particular example of a Frobenius equation. Zeytuncu let students determine what total numbers of nuggets were possible if they came in groups of 6, 9, and 20, and what is the largest number that is not possible. It turns out to be 43. He noted that there is no nice algebraic formula for the general question. 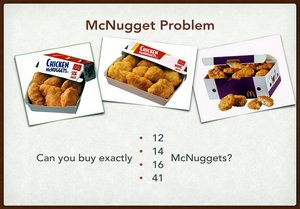 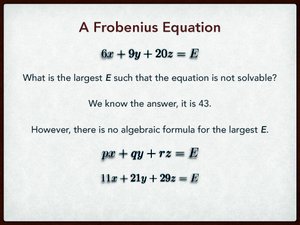 The crowd then got treated by the university to a free lunch, followed by Who Wants to Be a Mathematician.

These contestants played Who Wants to Be a Mathematician:

Below is a video from the action. 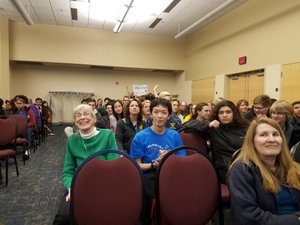 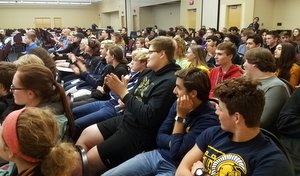 Steven and Pranhav led the whole way in this game. Both answered every question correctly, while Allen missed only one question. In the tie-breaker, between Steven and Pranhav, Steven was the first to answer correctly, so he finished in first place and earned himself \$500 and a TI-Npire CX.

Game two also had a tie for a long time. Yavjan and Derek each answered the first six questions correctly, so they were tied for first going into question seven. Yavjan answered that question correctly and Derek didn't, so Yavjan had the edge going into the last question. Those roles reversed on the last question, which put Derek in first and Yavjan only 100 points behind in second place. Derek thus earned himself \$500, a TI-Nspire CX, and a spot in the Square-Off Round against Steven.

Derek and Steven squared off for another \$500 and a chance at the \$2000 Bonus Question. The Square-Off question involved probability and approximation, and Steven signaled in very quickly with the correct answer to earn the spot in the Bonus Round. He thought for a while about the Bonus Question, and stayed with his first answer, which turned out to be correct. The answer brought his day's winnings to \$3,000. 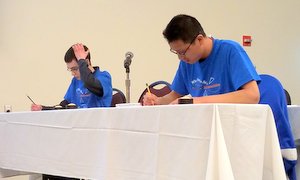 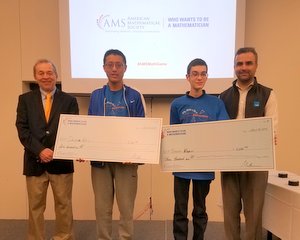 Both Steven and Derek attend the Indus Center for Academic Excellence (ICAE) in Lathrup Village, MI.

Note: In game one, Hafsa and Spencer tied for fourth. In game two, Tyler and John tied for third--Tyler opted for the calculus book and John chose the AHA! Solutions book.

Yunus Zeytuncu, and Morgan Yuncker, of UM-Dearborn, who coordinated everything at the university.

The students and teachers, who were such a wonderful audience, exuberantly rooting for and cheering on their classmates and the other contestants. Special thanks to Hafsa for filling it at the last minute after a contestant had to cancel.

Amanda Cowell, UM-Dearborn math major, who took all the photos and videos.