Who Wants to Be a Mathematician in Vancouver

On October 21, Who Wants to Be a Mathematician made its first visit outside the United States when it traveled to Canada, specifically to the Pacific Institute for the Mathematical Sciences (PIMS) and the University of British Columbia in Vancouver. About 200 students and teachers enjoyed the contest and a talk—hosted by PIMS—by Fok Sheun Leung (pictured below, left) of the university’s Department of Mathematics, who gave a very entertaining lecture explaining why being a mathematician can be even better than being a millionaire. The big winner in Who Wants to Be a Mathematician was Andrew Xu of Point Grey Secondary School, who won US$3000 from the AMS and a TI-Nspire graphing calculator from Texas Instruments.

"Thank you very much. I had a lot of fun at the competition."

"We really enjoyed being involved in your event. I hope you run it again :)"

"I was very excited to learn the great news about Larry and Andrew. Thank YOU for putting on such a wonderful event!"

“…And a Millionaire, Too,” by Fok Sheun Leung, University of British Columbia

Leung began by admitting that he hadn’t done a great deal of preparation for his lecture, but because his goal was to communicate to the students the power and beauty of mathematics—aspects that are part of his everyday life—the preparation wasn’t necessary. He fascinated the audience by using proofs and deeper ideas behind familiar concepts, such as the Pythagorean Theorem (which he pointed out was probably known to the Chinese about 500 years before Pythagoras). He acknowledged the similarity between the name of the contest to take place later and that of the TV show Who Wants to Be a Millionaire and said that given the choice between being a millionaire and being a mathematician, he hoped that many in the audience would choose the latter.

He concluded by saying that a mathematician is a real discoverer and that the feeling of coming up with a proof "is exactly like being the first person on a shore. There is nothing like it." 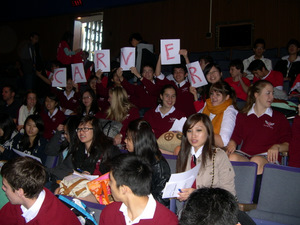 The eight contestants, who, as a group, scored higher on the qualifying test than any previous group, gave the enthusiastic audience plenty to cheer about that morning when they played two exciting games of Who Wants to Be a Mathematician.

Larry and Andrew then faced off on the Square-Off Question for another $500 and the chance at the $2000 Bonus Question. They each were incorrect on their first choice, but Andrew was first to signal in on the second chance and answered correctly.

In the Bonus Round, Andrew thought for a long time about the geometry question and didn't appear to do much calculating on paper. Apparently he didn't need to, though, because he signaled in with the correct answer to win another $2000.

The AMS thanks sponsors Texas Instruments, Maplesoft, and John Wiley and Sons for their continued generous support of Who Wants to Be a Mathematician. Thanks also to Melania Alvarez of PIMS, who helped generate the high response rate to the invitation letter that was sent to Vancouver-area schools, and to the enthusiastic students and teachers from the Vancouver area.