Who Wants to Be a Mathematician in the Virgin Islands

"This is just SO awesome!"

Four Virgin Islands high school students and four University of the Virgin Islands (UVI) undergraduates played Who Wants to Be a Mathematician at UVI in St. Thomas, coincidentally at the same time that several college basketball teams were taking part in a tournament on campus. The AMS math game may have had fewer entrants than the basketball tournament, but the audience in attendance for the math competition was just as enthusiastic as the basketball fans, being exposed to sides of mathematics that they may not have previously known about in lectures by Ken Ono and Eric Brussel, and giving exuberant encouragement to the eight contestants.

The two big winners were Julia Hogroian (above, right) of the Antilles School and Abrar Husein of UVI (also above), who each won $500 from the AMS and a TI-Nspire from Texas Instruments. 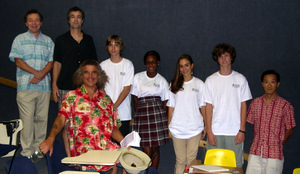 Below are descriptions of the lectures and the two games.

Who Wants to Be a Mathematician, lecture by Ken Ono

Ono described many jobs and fields for which good students in mathematics are qualified. Friends and colleagues of Ono's who are mathematicians have

After showing details of each of the above, Ono concluded by telling the students that being good in mathematics is not only intellectually rewarding, but also can land someone a "cool job" with some of the most modern, exciting companies in the world.

(Below at left: Eric, Ken, and Bill Butterworth talk nicely to the projection system; at right: Eric grabbing a number from the number line)

Brussel told the audience that he chose math because of his interest in what a teacher called "things of the mind." He talked about rational and irrational numbers, saying that even though there are many more of the latter, most people wouldn't encounter them, unless forced to by nature, as is the case with π (and noted that if you picked up an irrational number from the number line, you would have a hard time putting it back in the exact place). He explained that the notes we hear plucked on a string have frequencies that are whole number ratios of one another and the lower the ratio, the more pleasing the sound. This was known to the Greeks and the elegance of the result, coupled with the culture's reverence for music and geometry, led the Pythagoreans to conclude that the ratio of all quantities--such as the orbits of the planets--were ratios of whole numbers, and thus rational numbers. Around 500 BC, Hippasus of Metapantum showed that this was not the case, that indeed irrational numbers existed, and legend has it that he was cast into the sea for demonstrating such an unpleasing result. Brussel showed the elegant proof, involving sides and diagonals of pentagons, and concluded by advising the students that they should do what "appeals to you on a deep level."

Who Wants to Be a Mathematician (the games)

Here are all the prizes and money won that evening.

The AMS thanks sponsors Texas Instruments, Maplesoft, and John Wiley and Sons for their continued generous support of Who Wants to Be a Mathematician,and to the National Science Foundation which funded travel and some other expenses. Thanks also to Doug Iannucci of UVI, who made the local arrangements. 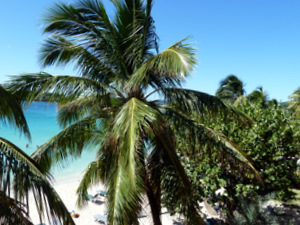