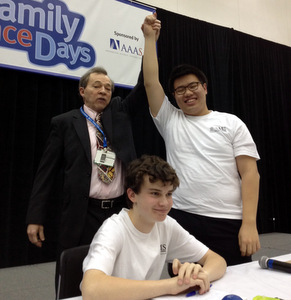 Who Wants to Be a Mathematician made a return appearance to Boston (the most recent trip had been for the 2012 national championship during the Joint Mathematics Meetings) and the big winner was Ryan Lee a sophomore at St. Mark's School (Ryan is pictured above with host Mike Breen and fellow contestant Graham Van Goffrier). Ryan won $2500 from the AMS and a TI-Nspire CX from Texas Instruments in a half-hour version of the game. The game was part of Family Science Days at this year's annual meeting of the American Association for the Advancement of Science.

Here are videos of the action, followed by photos and a description of the game: 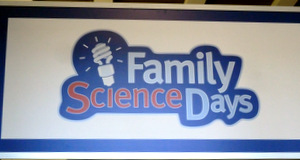 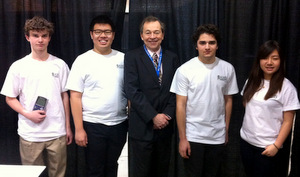 The contestants (above right) who played the game, all from the Boston area (left to right) are:

Hannah may merit a special Who Wants to Be a Mathematician Comeback Player of the Year Award. As the game was about to start and the contestants sat in their places on stage, Hannah's arm rested on what was later discovered to be "quadruple-strength hydrogen peroxide," which was left over from the previous Family Science Days performance, and which gave her quite a burning sensation on her arm. She took a few minutes to wash it off with a good amount of water and, fortunately, was able to play the game.

Thanks to Linda Cendes (AAAS) for help arranging and promoting the game (and helping to coordinate Hannah's rescue). The AMS also thanks sponsors Texas Instruments, Maplesoft, and John Wiley and Sons for supporting Who Wants to Be a Mathematician.

Read about some of the other mathematics events at the 2013 AAAS meeting.

A droid from the Missing Hyphen Division patrols for nonsensical notices.