Who Wants to Be a Mathematician : Barry Mazur Gives Arnold Ross Lecture

"Myself and the students had a wonderful time at both the lecture and the game. It was really a great trip for all. Thank you for arranging such a nice event. I hope to be part of it in the future."

On November 1, more than 300 Massachusetts high school students and their teachers filled the Museum of Science auditorium to hear the 2007 Arnold Ross Lecture by Barry Mazur and see Who Wants to Be a Mathematician.

How many prime numbers are there?, Barry Mazur, Harvard University

Glenn Stevens (Boston University), a former student of Mazur's and the past chair of the Arnold Ross Lecture Series Committee, introduced Mazur, calling him "one of the most influential mathematicians alive today." Stevens noted some of Mazur's accomplishments: getting a Ph.D. from Princeton University at the age of 21, winning the AMS Cole and Steele Prizes, and - as evidence of his wide-ranging interests - being elected to the American Philosophical Society.

Mazur introduced the topic of prime numbers with a story from Don Quixote in which Quixote asked a poet to write a poem with 17 lines. Because 17 is prime, the poet couldn't find a length for the poem's stanzas and was thus stymied. Mazur then showed Euclid's proof of the infinitude of the primes, demonstrated how the Sieve of Eratosthenes worked, and spoke a little about the Twin Primes Conjecture. Mazur pointed out that the conjecture is still undecided, as are many questions about primes, and explained to students that although they are accustomed to math being about answering questions, a good portion of mathematics is asking them.

Above: One of Riemann's functions (blue) approximating the number of primes (in red). (Graph by William Stein, courtesy of Barry Mazur.)

Two very exciting games of Who Wants to Be a Mathematician followed the break. The contestants who played (pictured below) are (left to right):

Both Christine and James thought and worked hard in the three minutes allotted to them, but unfortunately neither got the question correct. Although they didn't win the cash, they were still happy as they each won the new TI-Nspire graphing calculator. 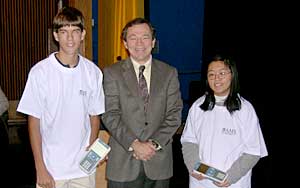 The AMS thanks Lynn Baum, Museum of Science, who made arrangements for the lecture and game; sponsors Texas Instruments, Maplesoft, and John Wiley and Sons for their continued generous support of Who Wants to Be a Mathematician; and the teachers who participated in this marvelous morning of mathematics.

Photographs by Who Wants to Be a Mathematician judge and co-creator Bill Butterworth (DePaul University Department of Mathematical Sciences) and by Robin Aguiar (AMS Meetings and Conferences).

Find out more about the Arnold Ross Lectures and Who Wants to Be aMathematician.