"Our students really enjoyed the competition - for some of our students it was the only 'field trip' they have taken in high school because they never want to miss their AP classes. Thank you again for the invitation."

"Thank you so much. We all had a wonderful time. I know it must take a lot of work to put that all together. It's always so well organized. I hope to see you next year."

Emily Perry (above, far left), a junior at Classical High School, and Karan Takhar (next to Emily), a sophomore at the Wheeler School, each won $2000 from the AMS playing Who Wants to Be a Mathematician at Providence College on Pi Day (3-14). Contestants also pictured above, left to right, are:

Along with the excitement provided by Emily and Karan each winning the grand prize, were excitement and enthusiasm from the audience, many of whom were classmates of the contestants.

In the bonus round, Emily and Karan thought about their answers for a while but entered their choices with plenty of time to spare. The audience was very quiet while the contestants were thinking, but erupted in applause once it was revealed that both contestants had won (and that the AMS was - gladly - about 1273pi dollars poorer). 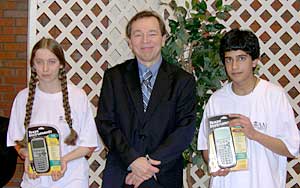 The prizes won by the contestants:

Thanks to all who made up the audience - a very enthusiastic group. Thanks also to Frank Ford and Lynne DeMasi of the Providence College Department of Mathematics and Computer Science for making arrangements for the game. The AMS also thanks sponsors Texas Instruments, Maplesoft, and John Wiley and Sons, for their continued support of Who Wants to Be a Mathematician, as well as local sponsors Pizza Pie-er and LaSalle Bakery, who contributed food gifts appropriate to the day.

Photographs by Who Wants to Be a Mathematician judge and co-creator Bill Butterworth of the DePaul University Department of Mathematical Sciences, and by Sandy Frost, Notices managing editor.