About 100 people celebrated Pi Day (3-14) 2006 by watching Who Wants to Be a Mathematician at Providence College in Providence, RI. No contestant won the $1500 grand prize, but the Rhode Island students did excite and delight the audience during the competition. 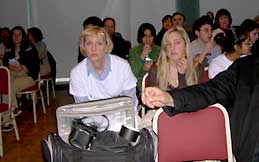 The eight contestants who qualified played two games of Who Wants to Be a Mathematician, each with four contestants.

Emily Perry won game one, getting all but one of the questions correct. On a geometry question, she used her "Help" to ask her teacher for the answer. The teacher carefully explained the answer to Emily and explained to the rest of the audience that the school's math team, including Emily, does not like geometry. 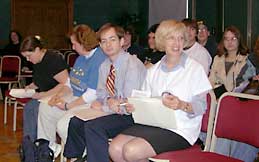 In game two, three students finished within 100 points of each other with Michael and Brendan (no relation to Emily) tied for first. Michael got the tie-breaking question correct to earn a chance at the $1500 grand prize question. Yet because of a problem during the game which might have affected the final score, it was decided that Brendan should also get a chance at the question. Thus, Michael, Brendan and Emily each participated in the bonus round, in which each could win $1500 by answering the question correctly.

The AMS cash reserves were not depleted, however, as unfortunately the three students missed the question. Their explanations showed that each was close to answering the question correctly, but because of a small miscalculation in each case, each chose the same wrong answer. When polled, and before the correct answer was revealed, the audience did choose correctly (but did not win any cash by doing so).

Although no cash was given away, all contestants received prizes. Each contestant's prize is listed below.

Calculus by Anton, Bivens and Davis, from John Wiley and Sons: Daniel Olson and Karan Takhar

What's Happening in the Mathematical Sciences by Barry Cipra, from the AMS: Greg Bowser and Lauren Kasparian

The AMS congratulates the contestants who qualified to play, and thanks the teachers for participating. The AMS also thanks game sponsors Maplesoft, Texas Instruments, and John Wiley and Sons for their continued support of the game; and the Providence College Department of Mathematics and Computer Science for hosting the game. Hope you had a happy Pi Day!