Luis Guerrero, a senior at the University of California, San Diego, won $2000 from the AMS and a TI-89 Titanium graphing calculator from Texas Instruments in the game Who Wants to Be a Mathematician at the Society for Advancement of Chicanos and Native Americans in Science (SACNAS) national conference in Tampa, FL October 28. Guerrero won an exciting game in which 200 points separated the top three contestants.

The game took place during the conference's Saturday morning breakfast and was attended by over 500 people. Although the questions were not easy, the hardest part for the contestants might have been not spilling eggs diablo on their signaling devices.

Luis finished in first place by 100 points, which gave him a shot at the $2000 bonus question, which concerned the Fibonacci sequence. Luis saved his "Help" for the bonus question and used it wisely, because he was a little unsure about his answer.

In fact, he changed his answer several times during the three minutes given to answer the question, but finally settled on the choice that both he, his helper, and the audience preferred. It was the correct choice and it earned him (but not his helper or the audience) $2000 from the AMS.

Prizes won by the six contestants: 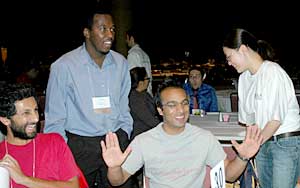 Some of the helpers and Huimei after the game

It was a very early morning for the audience and the contestants, but a worthwhile one as they all enjoyed the game. The AMS thanks everyone for participating, with special thanks to Ricardo Cortez (Tulane University) and Ivelisse Rubio (University of Puerto Rico-Humacao) for their help with the game. The AMS also thanks Texas Instruments, Maplesoft, and John Wiley and Sons for supporting Who Wants to Be a Mathematician.

Photographs by Who Wants to Be a Mathematician judge and co-creator Bill Butterworth of the DePaul University Department of Mathematical Sciences, and by AMS Public Awareness Officers Annette Emerson (judge) and Mike Breen (emcee).