Who Wants to Be a Mathematician at Tennessee Technological University

"I am so glad we were invited! It was a fun day, a challenging day, and a day which we relived with our students upon return." 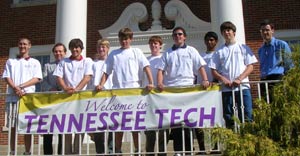 John Cooper (Oak Ridge High School) and Will Pickering (The McCallie School) each won $2000 from the AMS and were the big winners among eight contestants when Who Wants to Be a Mathematician came to Tennessee Technological University September 21, 2006. John and Will were two of about 100 people from middle and east Tennessee who enjoyed a morning of mathematics that began with the talk, When Does 1 + 1 = 0?, by Andrew J. Hetzel of the Tennessee Tech Department of Mathematics.

Hetzel talked about modular arithmetic, introducing the subject by giving some examples of clock arithmetic, and eventually answering the question that 1 + 1 = 0 mod two. He explained how the work of mathematicians Gauss, Fermat and Euler was relevant and showed images of each of the three on currency and stamps. Hetzel also gave applications of modular arithmetic, such as Universal Product Codes, International Standard Book Numbers, and the RSA public-key cryptosystem.

The eight contestants who played the two games (four at a time) of Who Wants to Be a Mathematician are:

In game one, Will Pickering led from the very beginning and won the game, missing only the last question. Game two was more of a see-saw event, with John Cooper working his way to first place to earn the win. One unusual aspect of the games was that all eight contestants used their "Help" option and got help from a teacher or friend. 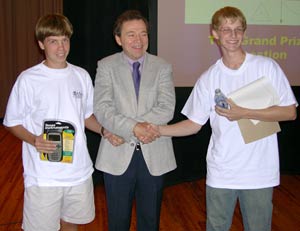 Will, Mike, and John

Will and John both got the bonus question correct and so each earned $2000. Before the correct choice was revealed and before Will and John revealed and explained their answers, the audience was polled for its choice. Everyone preferred what turned out to be the correct choice - a good showing for the high school students and teachers, and Tennessee Tech students and faculty who made up the audience.

The prizes won by each contestant are below.

Thanks to game sponsors Texas Instruments, Maplesoft, and John Wiley and Sons. Thanks also to Allan Mills and Brian O'Connor of the Tennessee Tech Department of Mathematics for arranging the event, and to the high school students and teachers of middle and east Tennessee who participated in the mathematical morning. 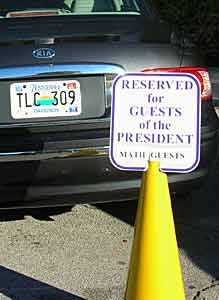