Susan Minkoff of the University of Maryland-Balitmore County (UMBC) represented the AMS at the annual Coalition for National Science Funding (CNSF) Exhibition on Capitol Hill held April 14, 2010. Professor Minkoff presented her work on two different application problems, which are modeled at least in part by the wave equation.  Her exhibit was entitled "Industrial Modeling and Simulation: The Wave of the Future" and provided attendees with information on these highly collaborative projects involving faculty and students at UMBC and other institutions.

One project involved modeling and simulation of a next generation of trace gas sensors. These sensors will lead to new ways to detect diseases via breath biomarkers and more portable and robust technology for monitoring of atmospheric pollutants, chemical weapons, etc. The other project involved seismic imaging of the earth's subsurface either to illuminate the near surface (environmental applications), the deep crust (earthquake modeling and prediction), or the region between these two regimes (possible petroleum targets). 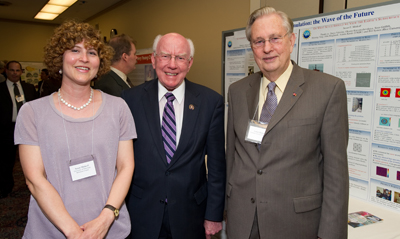 The annual CNSF Exhibition highlights research made possible through funding by the National Science Foundation. The 2010 exhibition included thirty-seven displays on a wide range of projects.

CNSF is an alliance of over 130 scientific and professional societies and universities united by a concern for the future viability of the national science, mathematics and engineering enterprise.