Mathematics Events at the 2012 AAAS Meeting

The 2012 annual meeting of the American Association for the Advancement of Science (AAAS) took place at the Vancouver Convention Centre in Vancouver, British Columbia, February 16-20. More than 11,000 people attended, including more than 6000 Family Science Days registrants. The AMS held its contest Who Wants to Be a Mathematician as part of Family Science Days, and hosted a booth in the exhibits area. Below are descriptions of some of the events related to mathematics that took place at the meeting.

Symposia: * Illuminating the Obesity Epidemic with Mathematics * Tracking the Diffusion of Ideas in Social Media * Lecturing and Tutoring at the African Institute for the Mathematical Sciences * Analogy in Applications of Mathematics to Other Disciplines * Data to Knowledge to Action: Computational Science in a Global Knowledge Society * Topological Quantum Computing

The AMS was the only mathematics organization that hosted an exhibit at the meeting. AMS Public Awareness Officer Annette Emerson (below, left) and Assistant Director of the AMS Washington Office Anita Benjamin (below, right) staffed the exhibit, which featured the 2012 Calendar of Mathematical Imagery and the Mathematical Moments program--a series of over 90 posters that promote appreciation of the role mathematics plays in science, nature, technology and human culture. Among the other items offered were the "Powered by Math" poster; the 2012 Mathematics Awareness Month "What Would You Do with All this Data?" theme poster; selected AMS books (including What's Happening in the Mathematical Sciences, A Mathematical Medley, and Modelling in Healthcare); and resources for high school and undergraduate mathematics students and faculty. Visitors to the exhibit included scientists, press, post-secondary and secondary teachers, and Family Days participants. Many of the latter picked up materials to bring back to colleagues and students. 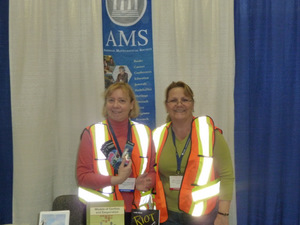 (As if being the only math booth wasn't attention-grabbing enough, vests were required during set-up.)

Illuminating the Obesity Epidemic with Mathematics

The three speakers in this symposium said that obesity--once only a problem for developed nations--is now a global phenomenon. They explained what they thought were the reasons behind increased obesity and offered solutions to the problem.

Boyd Swinburn (World Health Organization Collaborating Center for Obesity Prevention) noted that obesity has increased in almost all countries, but at different rates, due to physical, economic, and socio-cultural reasons. He modeled the effects of different interventions and said that those by governments, such as putting nutrition labels on the front of packages, are cost-saving, whereas individual actions, such as taking weight-loss drugs, cost more than they accomplish. 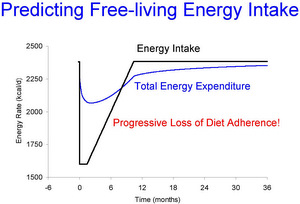 Kevin D. Hall (National Institutes of Health) began his talk by exposing the myth that eating 3500 calories a day will result in one pound of weight gain. Hall said that changes in metabolism must also be taken into account, but often aren't. He then showed a huge number of equations used to model weight gain or loss, which, when tested, predicted weight change pretty well. Since it is impossible to study weight change either in a lab (people can't be isolated for the length of time necessary) or in the real world (there is no reliable way to measure someone's food intake), no one really knows how much people eat, so he used his model to construct an accurate food intake curve (at left) given observed weight gain. Most people on diets lose weight initially, then plateau and eventually gain the weight back. The traditional explanation is that the plateau occurred only because of a slowdown in metabolism. Hall's model (graph, at left, courtesy of Kevin D. Hall) contradicts this and shows that the plateau is because people are going off their diets much earlier than thought. (Click on the image for a larger version.) Near the end of his talk, Hall pointed people to an online body weight simulator.

Carson Chow (NIH) showed a simplified model for weight change, based on different energy densities of fat, carbohydrates, and protein. He demonstrated that some traditional explanations are true (it is easier for heavy people to gain weight) but others aren't (the assumption that thin people have higher metabolisms is not backed up by data). Chow concluded by saying that random daily fluctuations in food intake don't have much effect on weight change, but if those fluctuations are correlated (for example, if you enter a rib-eating contest every day), then they will have an effect. Chow, who has a blog, has posted his talk.

Tracking the Diffusion of Ideas in Social Media 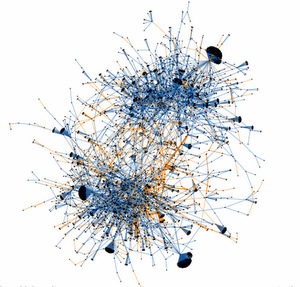 Filippo Menczer (Indiana University) spoke about information diffusion in social media, focusing in particular on tweets about politics on Twitter. Because of Twitter's structure, much social media data is available to researchers. Menczer showed examples (one at left regarding the meme #gop) showing that the retweet network (in blue) separates individuals into two polarized communities on the right and left. Mentions (in red), on the other hand, do not exhibit this polarity. This could be because people from one side are more liable to mention a comment from the other side (perhaps as an example). Menczer also talked about how to use the data to detect so-called astroturf campaigns, which are campaigns purposely orchestrated to look like grassroots efforts. (Image from the Truthy Project.)

Lecturing and Tutoring at the African Institute for the Mathematical Sciences

This workshop, moderated by Thierry Zomahoun (AIMS Next Einstein Initiative), gave background on why the institute was needed and updates on what the institute has done since its founding in 2003. The institute is not a degee-granting institution but offers courses to African students. Almost 400 students from 30 countries have attended--95% have gone on to graduate degrees. Two institute alumni spoke at the workshop. One, from Madagascar whose mother discouraged her from taking mathematics because she knew they could not afford to pay for graduate education, is now working on her PhD at the University of Calgary. The other, from Nigeria, is in the physics PhD program at the University of British Columbia.

Neil Turok, institute founder and chairman of the board, is the director of the Perimeter Institute for Theoretical Physics who started by saying some very good things about mathematics: It's

Because of these characteristics, Turok knew that math was a "cheap, effective" way to bring science and technology to Africa. He is from South Africa and returned there when apartheid ended to see what he could do for his home continent. Turok had the idea for a math institute but didn't act on it until his father, a member of Parliament, told him that he couldn't watch a rugby match until he had written a one-page proposal for the institute. Thus, Turok was "embarrassed" into doing the proposal. He said that embarrassment is a great motivator. Douw Steyn and James Ferguson (University of British Columbia) spoke about their experiences teaching at the institute. They both enjoyed their time there and were struck by the students' burning desire to learn, despite gaps in their knowledge.

Analogy in Applications of Mathematics to Other Disciplines

Many different applications of mathematics were presented in this symposium, with an emphasis on making sense of the vast amount of data that is present in many fields.

Robert Calderbank (Duke University) spoke about signal processing, especially about how to manage communications, in which portions of many different conversations arrive in networks simultaneously. Previously, algorithms "interfered" with conversations, delaying some conversations so that others could proceed. Calderbank and colleagues have devised a way to manage the interference, which allows for faster, more efficient communication. He also pointed out that today we are surrounded by sensors, and that math helps in arriving at a consensus about all the information gathered.

Gunnar Carlsson (Stanford University) said that data has shape, so topology can help people understand large data sets, including those with many dimensions. Three aspects of topology are especially useful:

Carlsson also said that topology is a good tool because it is not as susceptible as traditional methods to noise in data. He noted that topology has helped make sense of data sets from studies on diabetes and breast cancer, as well as film ratings on Netflix.

The talk by Michael Deem (Rice University) was about modularity, or hierarchy, in systems. One example is proteins: atoms make up molecules, which make up amino acids, which make up proteins. Deem said that modularity allows a system to be more robust. His work has shown analytically that modular systems evolve better than non-modular ones, and, in fact, the degree of modularity in a system may be due to how much and how fast its environment has changed. Most of his examples were from biology, but he also pointed out that our "world is flat" economy is less modular and thus both more vulnerable to recession and less able to recover from it.

Data to Knowledge to Action: Computational Science in a Global Knowledge Society

Eric Horvitz (Microsoft Research) gave an example of using data to cut hospital readmissions. Currently about 20% of patients are readmitted within 30 days of being discharged and about 35% within 90 days. Both percentages are regarded in the medical world as failures. Horvitz' team gathered data on about 300,00 hospital visits to a hospital in Washington state, and quantified 25,000 variables to try to predict readmission. They found important variables, that physicians did not expect, did predict readmissions. Two examples of those variables are the word "fluid" appearing in a patient's paper work and a patient spending at least 14 hours in the emergency room. Although lots of data are collected, not everything is documented: Hospital employees recognize and report only about 1/7 of medical errors. Horvitz concluded by saying that given data, computational algorithms can pick out significant variables that humans can't see. Then it can be decided if the variables are causal.

The 2013 AAAS annual meeting will be in Boston, February 14-18. The AAAS website has more information.

...but not its proofreaders