The Symmetry of Botswana Basketry and The Geometry of La Mezquita:
Two Talks at the MAA Session on Mathematics and the Arts

"Running ostrich, knees of the tortoise, roof of the rondavel, and urine trail of the bull." No, this was neither a lecture on zoology, nor a talk concerning some oddly named mathematical theorems. The speaker, Douglas Norton of Villanova University, was referring to a few of the many patterns that can be found on the baskets of Botswana. 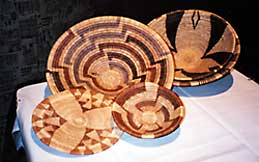 Almost a forgotten craft by the 1960's, these baskets are being made once again. Slide after slide projected images of beautiful symmetry, in shades of brown, as well as cream, mauve and pink. And yet, these lovely objects are very utilitarian: mokolwane palm branches are handwoven so tightly that the baskets will even hold liquid! Norton plans to continue studying the symmetry of these useful containers…and works of art.

For further information (and pictures), go to http://www.botswanacraft.bw/.

Moving from baskets to buildings, in the next talk Lynn Bodner of Monmouth University discussed the geometry of the portal and window grilles of La Mezquita (The Great Mosque) in Cordoba, Spain. These grilles--made of wood, marble or ivory--served a utilitarian purpose: letting in light and air while preventing birds from entering. Bodner showed the steps involved in creating three of the grille designs--specifically symmetry groups p4m, pmm, and p6m--using Geometer's Sketchpad, our modern equivalent to the original designers’ compass and straightedge.