The second of two feature columns on this subject (the first is here)...

The Fast Fourier Transform is fast, but not fast enough for realistic factorization of large numbers. Factoring an n-bit number would require 3n·2n operations; that number increases exponentially with n. This month's column will examine how for a quantum computer this growth could be made polynomial, and the factorization problem could become tractable.

Data in a quantum computer are stored in qubits, and manipulated by gates.

or, written in matrix notation,

b is called an entangled state. Here is why:

Parallel processing in a quantum computer

A quantum Fourier transform was first worked out by Peter Shor, in 1994. This refinement (which corresponds exactly to the the Radix-2 Cooley-Tukey algorithm) was discovered, almost immediately afterwards and independently, by Richard Cleve, Don Coppersmith and David Deutsch. Working with a register of q qubits

it uses a combination of the gates Rj (the R-gate applied to qubitj) with a set of reversible gates called Sj,k in Shor's notation. The gate Sj,k operates on the pair qubitj, qubitk, with j < k, as follows:

More specifically, suppose in our 3-qubit example that we carry along the input register as the first 3 qubits in the computation (this will turn out not be necessary). Then at the end if the first qubits are measured and report binary 5, i.e. |1>

|1>, the last three qubits must contain the superposition:

As set out in last month's column, we are working to discover the two prime factors of a number N by choosing an arbitrary number x smaller than N and detecting by Fourier analysis the periodicity of the sequence of remainders xa mod N, a= 0, 1, 2, etc.

We follow Shor, and work with a register L of length q, where N2 < 2q < 2N2, and a second register R large enough to hold N. Initially every qubit in L is in state |0>.

Step 1. We load into L an equiprobable superposition of all the numbers between 0 and 2q–1. This means applying the quantum gate Rj to qubitj, for j = 0, ... , q–1. These gates can be applied simultaneously.

Step 2. For each number a in L, we calculate xa mod N and write it in register R. This can be done simultaneously for all a in L. Now in registers L,R we have the superposition

Notation: Here and in what follows |k> in register L stands for |bq–1>

|b0>, where bq–1 ... b1b0 is the binary representation of k, with a similar convention for register R.

Step 3. We apply the Quantum Fourier Transform to register L. This replaces each |a> by

. In Fig. 1, each column in the matrix corresponds to a standard basis state for L, whereas the right-most column represents the contents of register R; the state of L

R is the superposition 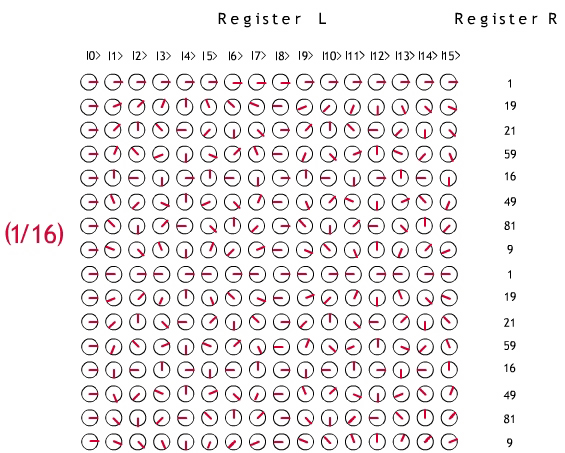 Before going to Step 4, let us note that the registers are set up to carry out a Discrete Fourier Transform. But that algorithm would require 2q multiplications for each of 2q rows: many too many operations. Shor's intuition was that superposition and entanglement could be harnessed to do all the work in a couple of steps, by first reading register R and then reading register L.

Step 4. We examine register R. One of the values will appear (they all have equal probability), and the others will be lost. Suppose that value is xα mod N. During the readout the contents of register L collapse to those states which were coupled with xα mod N (compare Example 2 above). 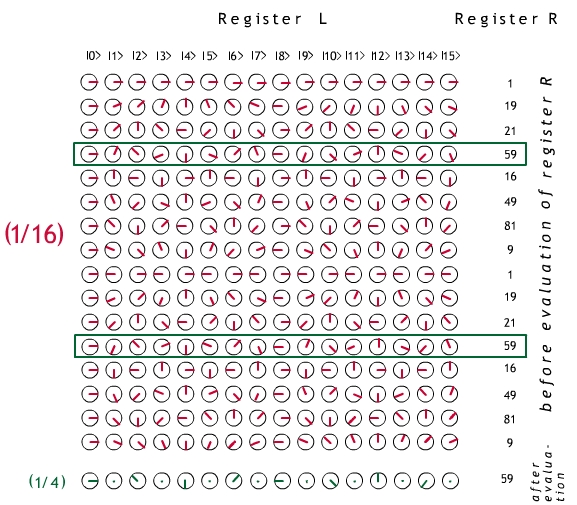 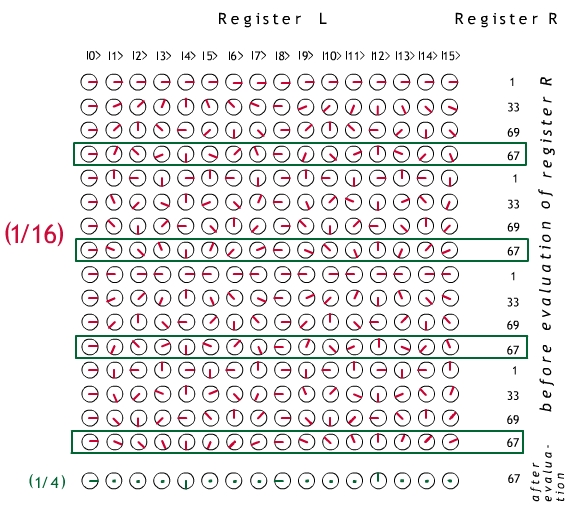 Step 5. We now read out register L. In the two examples we have considered, the readout will be an exact multiple of p = 2q/r. Repeating the experiment with the same x a small number of times leads with very high probability to a set of readouts whose only common divisor is p; so r can be determined and the problem is solved.

These examples are untypically simple in that r (8 and 4 in these two cases) was a power of 2, and therefore divided 2q exactly.

writing r = 2q/p for the last equality. The summation cycles through a symmetric set of p-th roots of 1, and is therefore zero, unless c is a multiple of p, in which case each term in the sum equals 1.

The general case requires a subtler analysis. Now 2q/r is not an integer. The readout in general cannot be an exact multiple of the frequency. But using a long enough sample (here is where the condition 2q > N2 comes into play --to analyze 85 "realistically" we would have had to use q = 13 and an 8192 x 8192 table of coefficients) guarantees, with high probability, a useful approximation. Complete details are in Shor's article referenced below. 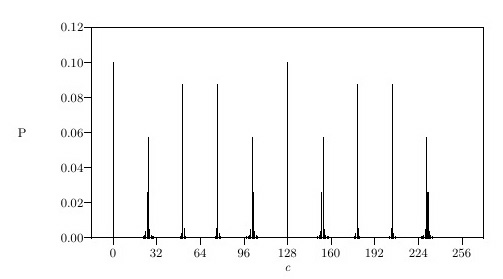 History of the Quantum Fourier Transform: