"Thank you for providing these opportunities for the kids. It's been a lot of fun for us. If you come back for the Science and Engineering Festival, we'll be there." --- Poolesville High School

"Thanks, it was fun, and the family science day was great." --- Thomas Jefferson School for Science and Technology

"Who Wants to Be a Mathematician is a great game show and I felt that it represented mathematics very well." --- Audience member

"We enjoyed it immensely and I know Michael did too. We would love to be able to compete again next year." --- St. Albans School

Four students from the Washington, DC area competed in an abbreviated version of Who Wants to Be a Mathematician on February 20, during Family Science Days at the 2011 annual meeting of the American Association for the Advancement of Science (AAAS). In a very tight match, Daniel Sun, a junior who attends Poolesville High School, was the big winner, winning US$2500 from the AMS and a TI-Nspire graphing calculator from Texas Instruments. A description of the contest, along with images, and video follows.

The four contestants who competed are pictured and identified (left to right) below.


No one missed any of the first six questions, which resulted in a four-way tie for first going into the last two questions. Brian Jones was the only contestant to answer question seven correctly, so he had a 700-point lead when the last question--worth 800 points--was revealed. The other three contestants answered it correctly, but Brian didn't, so Sin, Michael, and Daniel finished "regulation time" tied for first, 100 points ahead of Brian. It was the first time for Who Wants to Be a Mathematician that the four contestatns were that close.

Judge Bill Butterworth loaded up a tie-breaking question, an algebraic question that could be solved using a parity argument, in which the first contestant to answer correctly would win $500, the TI-Nspire, and a chance at the $2000 Bonus Question. Daniel signaled in first and was right, so he advanced to the Bonus Question.


Pressed for time, because of all the events scheduled, Daniel signaled in early, checked his answer and announced that he didn't need the remaining 90 seconds. He was right, both in that analysis and in his response to the question, and so won the additional $2000.

The AMS thanks sponsors Texas Instruments, Maplesoft, and John Wiley and Sons for their continued generous support of Who Wants to Be a Mathematician. Thanks also to Tiffany Lohwater and Rachel Schaffer, both of AAAS, who helped arrange things for Family Science Days.

Photographs by Anita Benjamin, of the AMS Government Relations and Programs Division, and by AMS Public Awareness Officer Annette Emerson.

Read more about the 2011 AAAS meeting. 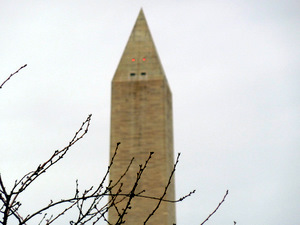 May prompt conspiracy theorists to conclude there's a monster inside this landmark,
or a surprise sequel Twilight: New Monument.