On Who Wants to Be a Mathematician's second trip to Vancouver, Anne Lim, a junior from Burnaby North Seconday School in British Columbia, won US$2500 and a TI-Nspire CX. The game was part of Family Science Days at the 2012 annual meeting of the American Association for the Advancement of Science. Below Anne talks about her plans for her winnings.

Videos of highlights from the game:

The contestants, pictured below, are (left to right): 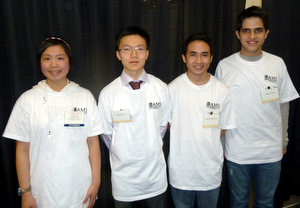 The game was wide open, with each of the four contestants occupying first place at some point in the game, either by themselves or in a tie. Jomar was in first for the longest time, for two straight questions. Going into the last question, one on combinatorics, Arshia and Oscar were tied for first. Anne won by being the only contestant to answer the question correctly. Finishing first earned her $500, a TI-Nspire CX, and a chance at the $2000 Bonus Question.

Anne worked very hard on the question, using up almost all the allotted three minutes, and signaled in right before time was up. Her answer was correct, which earned her another $2000. 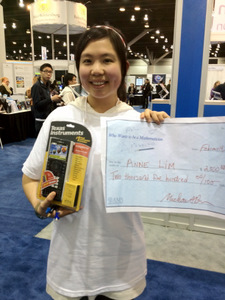 As you may have been able to guess, Oscar and Arshia tied for second. The tie was broken via a tie-breaking question conducted at the AMS booth. Oscar was the first to answer correctly, which gave him second place and a copy of Maple 15. 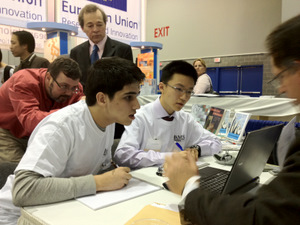 Below are the prizes won by the four contestants:

Thanks to Linda Cendes (AAAS) and Melania Alvarez (Pacific Institute for the Mathematical Sciences) for help arranging and promoting the game. The AMS also thanks sponsors Texas Instruments, Maplesoft, and John Wiley and Sons for supporting Who Wants to Be a Mathematician.

Read about some of the other mathematics events at the 2012 AAAS meeting.