Mathematics at the 2014 SACNAS National Conference 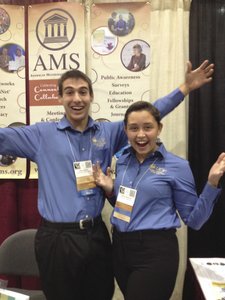 The 2014 National Conference of the Society for Advancement of Chicanos and Native Americans in Science (SACNAS) was held in Los Angeles, CA, October 16-18. The conference theme was Creativity, Vision, & Drive: Toward Full Representation in STEM. The conference featured keynote speakers, sessions and symposia, awards, undergraduate student poster presentations, graduate student presentations, mentoring, field trips, and social events--and mathematics continues to be a significant component of the program. The AMS is pleased to be a Special Session Sponsor and cover the mathematics at this annual conference.

"The SACNAS meals, venue, talks, workshops, sessions and events all came together to form a transformative experience. At this conference, I met some people who will be my life-long mentors. The speakers and presenters served as great inspirations for my future and they also serve as resources that I can reach out to. The exhibitors provided me with the knowledge to arm myself with on my quest for graduate school." -- Adela Yang. Read more of her blog post, "SACNAS: a transformative experience."

The Undergraduate Student Poster presentations, held in the exhibit hall, were a highlight of the conference. Below is a slideshow of presenters in the mathematical sciences.

"I advise any student to attend SACNAS at the very first opportunity they get and take full advantage of the opportunities available," blogged undergraduate Joseph Chavoya.

See the abstracts of all the presenters. Again many of the mathematicians at the conference served as mentors and poster judges at the 2014 National SACNAS Conference. Many have volunteered to serve as a judge each year, and some are featured in the SACNAS Biography Project. The AMS gave each student poster presenter a bag with Mathematical Understanding of Nature: Essays on Amazing Physical Phenomena and Their Understanding by Mathematicians , by V. I. Arnold, and some small gifts in appreciation of their work.

There were Graduate Student Presentations in Mathematical Sciences as well. The prizewinners in mathematics were Roberto Soto (University of Iowa) for Universal Deformation Rings and Semihedral Groups and Clara Dominguez-Islas (University of Washington) for A Fixed-Effects Approach for Precise and Robust Estimation in Meta-Analysis.

This annual session drew at least 120 students and mentors. This is a great opportunity for undergraduate and graduate students to share experiences with each other and with mentors, and to discuss mathematics, courses, graduate programs and careers in the mathematical sciences. There was a mentor at each table to answer questions and guide the discussions. 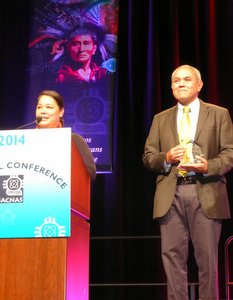 Herbert Medina (Loyola Marymount University) received the 2014 Distinguished Undergraduate Institution Mentor Award. He "has published mathematical reseeach in functional analysis, wavelets, and polymonial approximations (collaboratively with undergrduates). One of his passions is working to increase participation of historically underrepresented groups in STEM. For example, he is one of five founding co-directors of of the Mathematical Sciences Research Institute Undergraduate Program (MSRI-UP) in Berkeley, and from 1998-2002 he co-directed the Summer Institute in Mathematics for Undergraduates (SIMU)."

(Photo: Herbert Medina and Dr. Rebecca E. Garcia, Associate Professor of Mathematics at Sam Houston State University; she was an undergraduate student of Medina's at Loyola Marymount University who went on to earn a Ph.D. at New Mexico State University.)

The AMS was among the institutes, colleges, universities, associations, hospitals, companies and government agencies that provided information about educational programs and career opportunities in the sciences, and the AMS is also a Special Session Sponsor. The AMS exhibit drew undergraduate and graduate students, mathematicians, and mentors. AMS Public Awareness Officer Annette Emerson answered questions about the Society's programs and services including Find Graduate Programs in the Mathematical Sciences. This online resource allows users to search and sort grad programs in the U.S. and Canada by specialties, requirements, masters or PhD, size and location.

The AMS provided students and mentors with materials including:

The Society also displayed resources from the American Statistical Association on careers, awards and scholarships, membership, meetings and publications.

Dagan Karp (Harvey Mudd College and co-Editor of the AMS eMentoring Network in the Mathematical Science Blog) posted "Mathematics at SACNAS 2014," an endorsement of SACNAS and this conference, "the largest gathering of minority students in the US," along with a list of all the mathematics workshops, sessions and events. On the last day of the conference SACNAS hosted a Family Engagement Event, at which families of local student presenters were welcomed to the "SACNAS family" by SACNAS President Maggie Werner-Washburne and Executive Director Antonia Franco, and could engage in some hands-on science activities, and hear some young scientists talk about their career trajectories and current work.