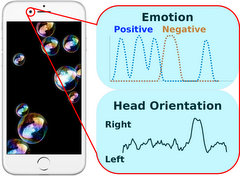 Autism affects more than 1% of the children in the U.S. Yet many families either have no access to specialists who can diagnose the disorder, or have to wait several months for an appointment with such a specialist--months that are crucial in neurological development. A team of researchers has developed an app that allows parents to track a child’s response to visual cues (such as the bubbles below), records and analyzes those responses, and recommends a referral if necessary. An important component of the video portion of the app involves computer vision and machine learning, which rely on linear algebra and probability. Although the app depends on complicated algorithms, it is easy to use and its performance matches that of experts. The app is still being tested, but may eventually provide a dramatic change in access to screening for concerned parents.

The app is not meant to replace doctors, only to help people who don’t have access to medical experts. That access is almost nonexistent in rural areas and less-developed countries. For example, the continent of Africa has 50 autism experts for its 500 million people. To test the app’s effectiveness, developers shipped two phones equipped with the app to a nurse in Africa and asked her to bring them to one of the villages she visited. With no special training, she was able to do screenings on 50 children who would never have had the chance to see an expert. The app’s early success is encouraging, and researchers hope to adapt its capabilities to other neurological disorders, such as PTSD.