Over 1000 people attended the 2012 Annual Meeting of the Society for Industrial and Applied Mathematics (SIAM), which was held jointly with the SIAM Conference on Financial Mathematics, at the Hyatt in Minneapolis, MN July 9-13. Below are links to summaries of some of the events that took place at the meeting. (Click on the graphics for larger versions.)

On the Shape of Data, Gunnar E. Carlsson (Stanford University)

Carlsson delivered the meeting's first lecture, which was also the inaugural AMS-sponsored lecture at a SIAM annual meeting. He explained how topology is used to analyze data, for example, how it is used to identify clusters in a data set. Three key ideas in topology--invariance under decomposition, being coordinate-free, and using compressed representations--help in representing data and measuring its shape. Carlsson uses simplicial complexes, in which components are replaced by data clusters, to represent shapes. He showed how the technique clearly differentiated bewtween healthy, pre-diabetic, and diabetic populations. Later Carlsson explained persistent homology, in this case using Betti numbers (each of which is the number of n-dimensional holes in a shape) to measure shapes. Then, even when there is noise, a data set can be characterized by those holes that persist across many different scales. (Image courtesy of Gunnar Carlsson)

Past President's Address: Reflections on SIAM. Publishing, and the Opportunities Before Us, Doug Arnold (University of Minnesota) 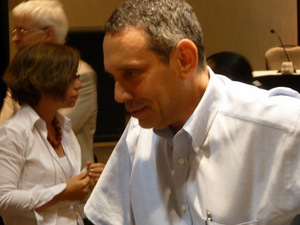 Current SIAM President Nick Trefethen (far left) introduced Past President Doug Arnold (foreground) by making the analogy that how he feels about Doug is how President Obama feels about George W. Bush. Trefethen then got serious, saying that Arnold "had a unique combination of enthusiasm, commitment, and good sense."

Most of Arnold's address had to do with publishing, which he noted was not a big part of his planned presidential agenda, but which did take up a lot of his time during his term. He focused on three articles that he has authored or co-authored, which dealt with three aspects of research.

1. Integrity Under Attack
In early 2009, James Luedtke (University of Wisconsin-Madison) told Arnold about an article that he had co-authored with Shabbir Ahmed (Georgia Tech) ("A Sample Approximation Approach for Optimization with Probabilistic Constraints," SIAM Journal on Optimization, v. 19, n. 2, 2008) that had been copied verbatim in the International Journal of Statistics and Systems, beginning in mid-sentence on page 17 of the original article. No one could get in touch with the journal's publisher, including the editor-in-chief of the journal, but Arnold found that the authors had plagiarized several times before. Eventually a large fraction of the journal's editorial board resigned, although their names are still listed online. 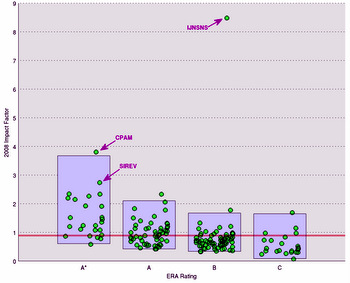 2. Nefarious Numbers
The numbers in this case are bibliometrics, such as an authors' H-factor or a journal's Impact Factor. Arnold cited Goodheart's Law: When a measure becomes a target, it ceases to be a good measure, and gave an example of a journal--the International Journal of Nonlinear Sciences and Numerical Simulation (IJNSNS in the graph)--that had manipulated its Impact Factor. This journal had the highest Impact Factor in applied math from 2006 to 2009, yet Arnold said that he had never read a paper it had published, and after looking at the Table of Contents of a few issues, added that he wouldn't want to. He dug deeper and found that over a period of two years (the relevant time for the Impact Factor) the journal's editor-in-chief had cited articles from the journal 243 times, whereas, for example, over the same period the top-citing author for SIAM Review had cited the Review only seven times. The graph at left compares a journal's Impact Factor with its rating by the Australian Research Council, as part of a review for the Excellence in Research Australia (ERA) initiative. The journals pointed to in the A* group are Communications on Pure and Applied Mathematics and SIAM Review. 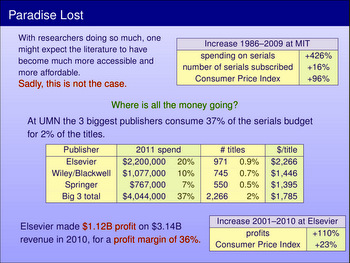 3. Mathematicians Take a Stand
The article above and this part of the talk relates to the Elsevier boycott. Earlier this year, Timothy Gowers announced on his blog that because of non-competitive prices and practices like bundling, he was not going to submit articles to journals published by Elsevier. He invited other mathematicians to join him and so far over 12,000 people, including Arnold, have signed Gowers' petition. Arnold acknowledged that publishing high-quality journals is not cheap but maintained that Elsevier's subscription prices are too high. He hoped that publishers and authors would experiment with different publishing models to see what works best. 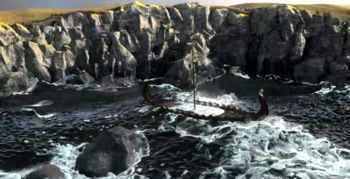 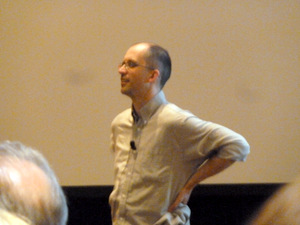 Bridson (at left), who has worked on several films, gave the audience many examples of visual effects and showed how representing shapes and effects with equations has made producing these effects cheaper and more efficient. He noted that the central problem is to take an abstract description of a scene and make a two-dimensional image of it. Perhaps his central joy in the process is being able to produce images that exist only in the imagination. In physics-based animation, people model the fundamental mathematics of a phenomenon and then solve the relevant equations numerically. A solution is achieved "if the director is happy." Bridson thinks that in the future,

During the question-and-answer period following the lecture, Bridson was asked if he envisioned a time when only digital actors would appear in films. He laughed a bit and said, "We're past that." For example, digital effects have been used to add tears to real actors or to modify their facial expressions. He did say that doing things with a mouse is harder than an actor doing them, and added that scenes in which digital effects are used so that dead actors can appear in a film are "inevitable." (Image at top courtesy of Dan Wood.)

Shuckburgh said that data generated from a week of climate models amount to more than the total amount of data gathered before recent times. Carlsson, who gave a plenary talk on the shape of data, stated that "BIG doesn't do it justice, complexity is important," and that the crucial thing is to get insight from a data set. Kolda adapted the "You might be a ..." theme to say that you might have big data if you

She added that one challenge is enabling access to large data sets. Later she said that researchers should be careful when drawing conclusions from data because "if you stare at anything long enough, you're going to find something." Harrod advised people to get their hands on real data, not on what's been "artificially generated." Pantula noted that when he began his research career, anything over size 30 was big. He feels that mathematics can help in data visualization, clustering algorithmes, and with privacy.

Large-scale architectural models involve complex, free-form geometry. Realizing those shapes is challenging and costly. Pottmann said that current digital design technology is not adapted to the demands in this area, so he uses a discrete version of differential geometry and discrete analogs of the subject's concepts in his work. Regarding discrete differential geometry he said 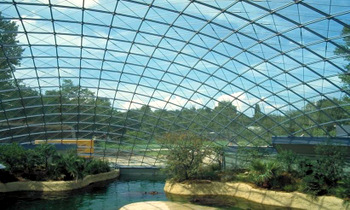 He showed several examples of how he has used planar quad meshes to represent complex shapes. These meshes reflect a shape's curvature behavior and are easier to work with than triangular meshes, partially because of how the beams and meshes intersect. One particularly difficult design involved the "flying carpet" at the Louvre. In this case, two layers were involved, so a hybrid of triangular and quad meshes was used, which saved material and money. In the latter part of his plenary talk he showed a fast way to design self-supporting surfaces. (Photo of structure at Berlin Zoo, courtesy of Helmut Pottmann.)

Ugander visited at Facebook and used linear programming to organize information so that, for example, data for people who may be connected resides on the same machine. His work reduced the query time by about one-half and wound up using about 10 machines for the problem, which is down from about 60 previously. He also did work on the distance between Facebook users, as in Stanley Milgram's "Six Degrees of Separation" study, and found the Facebook connection graph to have a diameter of 41 and an average distance between users of about 4.74. (Image of 2010 Facebook connections courtesy of Johan Ugander.)

Lauter then talked about two applications of ECC: the first real, the other proposed, but not yet realized. Bit Torrent is used to distribute videos through a network by using a linear combinations of packets from nodes at which the videos are already present. So if a single node is "polluted" (as happened in 2005 with the series Rome) its packets will be garbage, which will affect many users. ECC can secure the network and curtail intentional pollution. The second application involves health care and would be a way to preserve patient confidentiality when doctors and insurance companies exchange information.

On Tuesday afternoon, the prizes and awards luncheon was held. Pictured above are some of the prize and award winners, all of whom are listed below. In addition, the 2012 class of SIAM Fellows was recognized.

The AMS displayed books in applied mathematics on sale at a discount for attendees, AMS posters, Mathematical Moments, information on AMS programs and services, such as employment services, fellowships and travel grants, and prizes and awards for mathematicians and students in applied fields. 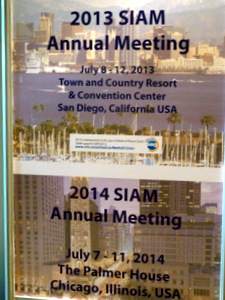